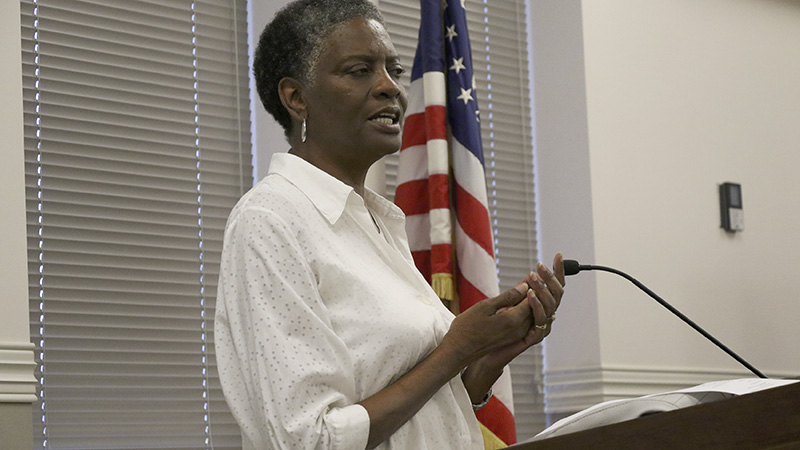 REQUESTING HELP: Idella Potts asked the Council for help in addressing a sink hole near her home during Tuesday’s meeting. Photo by Jeremy Pittari

Additionally, two candidates for two empty judge seats on the 10th Chancery Court spoke to the audience to ask for their support in the upcoming election.

Idella Potts addressed the Council about a long-standing sinkhole near her home on Bruce Street and Main Street. She said the problem has been there since at least 2011, and nothing has been done to address it.

After the meeting, Public Works Director Eric Morris met with Potts to gather additional details about the problem.

Tommie Morrison asked if the median near his home on the 800 block of Herrin Drive could be mowed more often. He said that the last time it was mowed the grass was as high as his waist. When city crews come out to cut the median, it typically only takes 30 minutes, so he asked if the job could be done with more frequency.

Jemika Williams said she has been dealing with a code enforcement issue concerning the construction of her home on Jefferson Davis Parkway. Apparently, after one inspection had been completed with favorable results, a city inspector returned to inform her that there were issues with the concrete slab that would cost in excess of $8,600 to remedy. She asked that the city come to some sort of agreement to rectify the situation. Mayor Ed Pinero asked Council attorney Nathan Farmer to review her information to determine if a solution could be found.

After the Council addressed those concerns, they heard from Sheila Smallwood, and Chad Smith, who are both running for separate seats as a 10th Chancery Court judge.

Smallwood cited her two-plus decades of experience as a lawyer and her experience as a municipal court judge and current position as the Forrest County Justice Court Judge in addition to being a mother.

Smith said he has family that lives in Poplarville, so he has a vested interest in the things that go on within Pearl River County.

The next Council meeting will be held on Nov. 6, which is also Election Day, at 5 p.m. in City Hall.

Board tables hiring of new employee