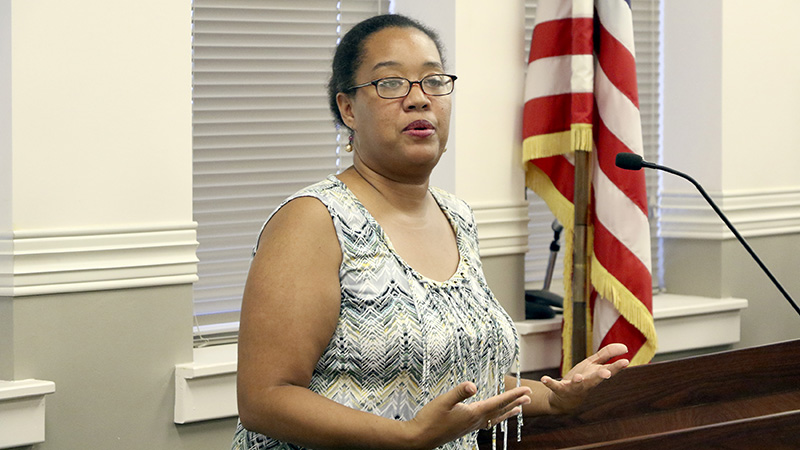 Stephanie Piper with Gulf Coast Center for Nonviolence read the proclamation before the Council approved it, stating that within the last year, the center provided assistance to 2,498 victims of domestic violence within the six coastal counties. During that time, the center also received 15,234 calls to the crisis hotline in the same region.

The Center provides several services to victims of domestic violence, including court advocacy, case management and shelter options. Of the total number of cases within the six coastal counties, Piper said about 10 percent originate in Pearl River County. The other five counties include Stone, George, Harrison, Hancock and Jackson.

The Council also approved moving forward with a project to replace aging transite water lines, which are comprised of asbestos-cement, in the area of Ponderosa, Telly Road, Woodland Heights and Stemwood Drive. Jonathan Hickman with Dungan Engineering said the lines have become fragile over time, leading to failures.

Councilor Larry Breland asked if the transite lines were the cause of occasional discoloration in the water at the tap. Public Works Director Eric Morris said those lines would not be the cause, but rather instances of reduced water pressure due to fire hydrant repairs or flushing.

The discoloration is from the sediment build up being flushed out when water pressure is restored.

Work to replace the transite pipe will be paid for with a State Revolving Loan Fund. The project is estimated to cost the city $3 million for the first phase. Since this phase will not remove all of the transite line, another is anticipated.

A motion to go out for bids for the construction of a new fire station at the end of Goodyear Boulevard was also approved during Tuesday’s meeting. Fire Chief Keith Brown said the plans include a wood frame structure instead of a steel frame structure, providing a $60,000 to $70,000 savings from the original plan.

Brown said construction of the facility is estimated to cost $420,000. Picayune Fire Department hopes to repay 100 percent of the construction cost utilizing fire insurance rebate funds. Brown said the department received a check a couple of weeks ago for $62,000, which has already been deposited into an account for that purpose.

A motion to award improvement work to a drainage ditch at 318 Memorial Boulevard was awarded to Jack Ferrill’s Heavy Equipment. The bid was for $82,825, below the projected cost of $97,000. Hickman said city officials reviewed the company and feel confident it can conduct the work effectively despite the low bid. However, Dungan Engineering will oversee the project.