Board tables hiring of new employee 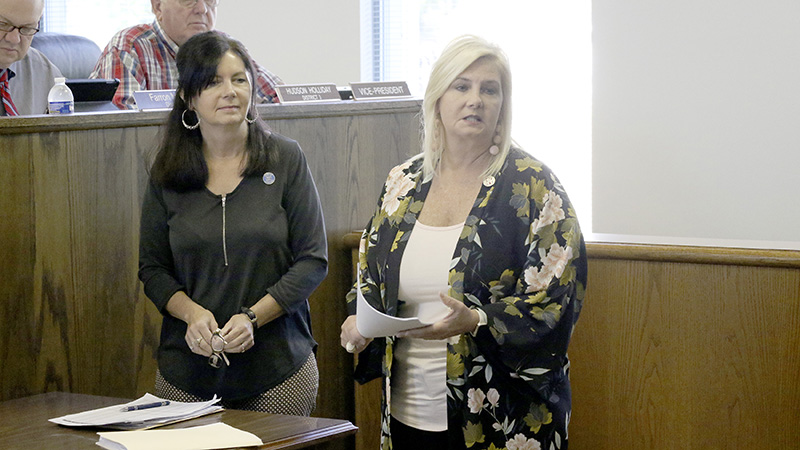 The Pearl River County Board of Supervisors heard from local legislators about the additional funding coming from the state, and continued discussions about the possibility of hiring someone to complete paperwork for volunteer fire departments.

State Senator Angela Hill and State Representative Stacey Wilkes informed the Board that additional funding from a BP settlement and the collection of online sales tax will give the county an opportunity to fix roads and bridges and boost economic development.

Hill said that the county leaders can expect to receive $840,000 per year from the collection of Internet sales tax. That money can be used to repair roads, bridges or other forms of infrastructure.

As for the BP settlement money, each county in the six coastal county region will be able to submit project ideas, which will be vetted by the Mississippi Development Authority and approved by the Legislature.

Using the budget funding already available to them, the county’s road department completed 45.6 miles of paving work from October of last year to October of this year, said Road Manager Charlie Schielder said.

Of that total work completed, 32 miles were paved by county crews, with the difference of the total miles being completed by Huey Stockstill, LLC.

Cleanup efforts to rectify issues with a parcel of land located at 28 Hillsdale Gumpond Road have hit a snag. Code Enforcement officer Kolby Davis said that since the property is owned by more than one person, each part of the property has to be cleaned individually. Board attorney Joe Montgomery said ownership for a number of the parcels has reverted to the state, and the structures on the property sit on parcels of land owned by at least three different people. While the state will allow the county to clean the property, it will remain under state ownership until it’s sold. The county could opt to buy the state-owned parcels, or ask that it be donated, but then the county would be unable to sell it. No action was taken on the matter.

Fire Services Coordinator Danny Manley spoke to the Board about hiring someone to help volunteer fire departments complete state mandated paper work. He said departments would be able to participate voluntarily, which would allow the volunteers more time to respond to emergencies or spend time with family.

District II Supervisor Hudson Holliday said that he’s heard concerns from members of volunteer fire departments that using the county employee to complete paper work would restrict what each department could purchase. Manley said that using the new employee to complete departmental paperwork will not change what departments can purchase. Holliday then asked how much hiring the new employee would cost the county. In addition to $36,000 in salary, the total expense to the county with benefits would be about $55,000, Manley said.

Ultimately the Board tabled the matter so they could discuss it further and allow time for the chiefs from all 12 volunteer fire departments to meet with Manley.

The next Board of Supervisors meeting will be Nov. 5 at 9 a.m. in the courthouse on Julia Street.