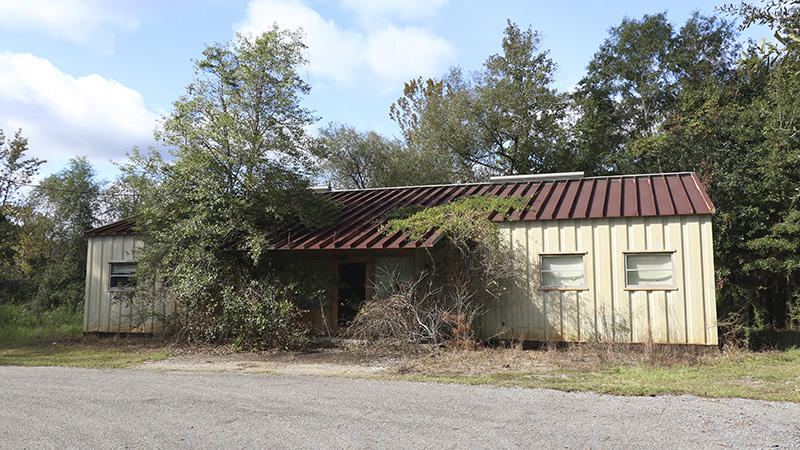 At top is the building that occupies a site where the city of Picayune would like to build a new fire station to replace the one on Palestine Road. Photo by Jeremy Pittari

After some adjustments were made from the original plan proposed more than a year ago, the Picayune Fire Department is hopeful that a new fire station will be complete at the end of Goodyear Boulevard in the next eight months or so.

A first set of plans was presented to the City Council in July of last year, and a motion was approved during that meeting to seek bids for a 4,402-square-foot building. However, Fire Chief Keith Brown said there were issues with the first design, most of which was the rising cost of steel. While the cost to build the new station under that first set of plans was estimated to be about $350,000 a year ago, fluctuation in the cost of steel pushed actual costs to about $500,000.

In response, an architect was brought in to design a more cost effective building, resulting in the steel frame being changed to a wooden frame and reducing the square footage.

Earlier this month, the Council approved a motion to go out for bids to construct the building using the new plans. Those plans reduced the square footage to 2,824, of which 2,482 will be heated and cooled, 1,261 will house the fire trucks and the difference will be porches. The estimate to construct this new plan is closer to $400,000 and if the Council approved a bid at the bid opening set for Nov. 8 at 2 p.m., then the new station could be complete in six to eight months.

Within this new plan, there will be the potential for four bunks, a kitchen and dining area, truck bay, janitorial storage, 2.5 bathrooms and a day room. One of the four bunks will initially be used as office space, but if a future budget allows, a fourth firefighter could be assigned to the station.

Brown said that the plan is for the department to reimburse the city for the cost of the building within five years using fire insurance rebate funds. Typically those funds are used by the department to replace aging fire trucks, however Brown said he feels the existing fleet of trucks should last the anticipated five years. Fire trucks typically have a life span of 20 years while ladder trucks can last as long as 25 years.

Brown said that the trucks are certified annually by a third party to ensure they are in operating order. However, Brown said fire insurance rebate funds fluctuate from year to year, so if it takes more than five years to repay the city the department will have to do more testing on its existing fleet.

If the project moves forward as anticipated, the new station will replace one currently situated on Palestine Road next to the Pearl River County SCPA. Brown said that while the building was constructed by the city, it sits on 16th section land, essentially making it property of the Picayune School District.

If continued use of the old building was required, Brown said it would need extensive renovation. Currently the roof does not leak, but it has needed patching quite often.

“We’ve gotten about as much life out of it as we can,” Brown said.

What would become of the old building if and when the fire department moves out will be up to the District’s Board of Trustees.

At the proposed site for the new building sits an old train engine. Brown said that the plans took the train’s current location into consideration, so it won’t need to be moved before construction can begin. But, a local group has expressed interest in restoring the engine and displaying it somewhere in the city, possibly on the tracks it currently occupies, but closer to Palestine Road, Brown said.

However, since there will be a major expense involved, there are no definite plans for the train engine.