Supervisors name new person to Utility Authority Board of Directors 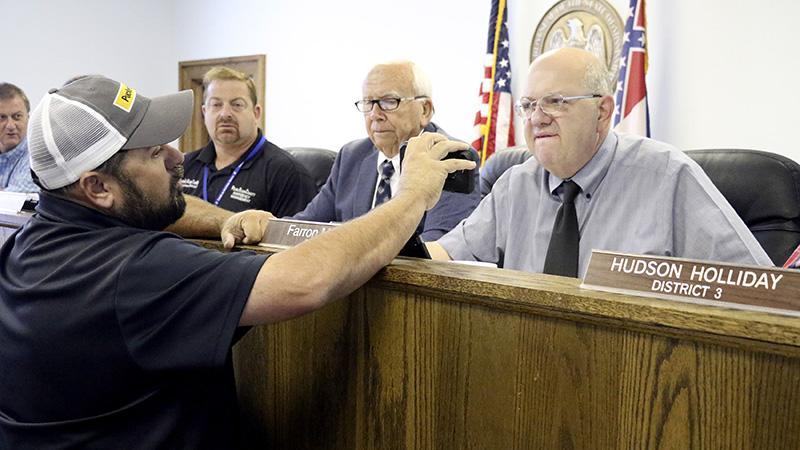 EVIDENCE: At left, Charlie Schielder shows District IV Supervisor Farron Moeller a picture of the facility that submitted the lowest bid for an excavator. Due to the lack of a service department, the Board voted to go with the next lowest bid. Photo by Jeremy Pittari

The new member will replace Fred Aubrey on the Utility Authority’s Board of Directors.

Two people were nominated during the Supervisor’s meeting, Bill Burns and Larry Stanford.

District III Supervisor Hudson Holliday nominated Stanford and described him as retired from Pearl River Community College and a knowledgeable person who also lives in the Hillsdale area, which according to Holliday has been neglected by the Utility Authority. Even though a water well was built in that area, Holliday says that there are no distribution lines, preventing further development in that area of the county.

“If they don’t have water, they can’t build,” Holliday said.

District IV Supervisor Farron Moeller nominated Bill Burns, who is retired from Stennis Space Center and has some knowledge of water systems. Moeller added that Burns lives in the Round Rock subdivision, another area in the county that has complaints about the Utility Authority.

Burns was voted into the position with Smith, Perry and Moeller voting for, and Holliday and Hart voting against.

During discussion of purchasing a new excavator, the Board heard from Road Department Manager Charlie Schielder, who presented two bids. The lowest bid for $157,000 from JWH Equipment turned out not to be the best one because the company did not have a service department.

The Board decided to approve a motion to accept the next lowest bid from Mid South Machinery for $169,900.

The next meeting of the Board will be Sept. 19, at 9 a.m. in the courthouse on Julia Street.