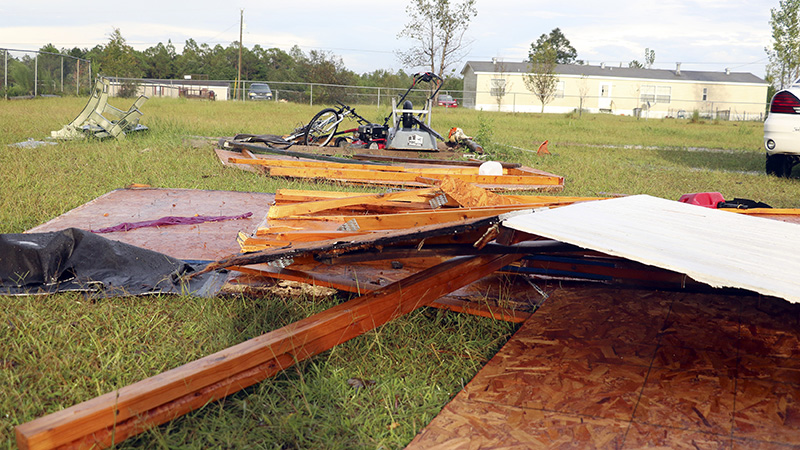 LUMBER PILE: What appears to be a pile of wood was a shed before Thursday’s storm blew it down. Photo by Jeremy Pittari

Just before 4 p.m. Thursday, about nine homes in north Hancock County were damaged by what is currently considered to be a small tornado.

Danna Grabert said she came home that afternoon to find her roof was leaking after the storm damaged the roof of her mobile home on Longview Drive.

Adam said a bus driver for West Hancock Elementary was dropping off children when high winds popped the door open to the vehicle, causing her to turn the bus around and leave the area.

Dalton Weatherford said he was in his home a few blocks away from Longview Drive when he heard what sounded like a train before hearing a loud noise like a car door.

Keira Ellis also heard the high winds approaching while in her home on Longview Drive that afternoon.  She and her dog took shelter in a hallway when the high winds passed over her home. She said the worst of the storm lasted about 30 seconds. Her home suffered some damage to some siding and skirting and a tree in her backyard was blown down.

Adam said that no one reported injuries as a result of the storm, but several homes showed visible damage to shingles, some of which included holes in the roof.

Phillip Campo’s home on East Fork was missing a number of shingles.