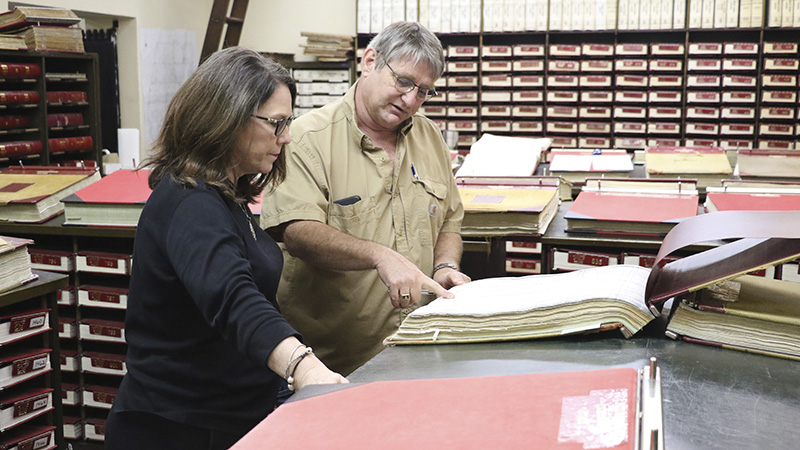 Less than a month remains before all of the hand written property records within Pearl River County will be professionally scanned.

Since taking office, Chancery Clerk Melinda Bowman said she has continued the process of scanning land records that began back in 2007. The first step involved scanning all sectional indexes on record in the Pearl River County Chancery Court office back to mid 1974, under the direction of the previous Chancery Clerk.

Bowman was elected to office in 2015, and upon taking the position, she continued the scanning process of handwritten sectional indexes back to the county’s founding in 1890.

The process at times meant sending the historic documents to a company called Revolution Data Systems located in Abita Springs, La. Bowman said the books have to be scanned at the company’s site because a number of the older books involve historic binding that has to be professionally re-sewn after the books are taken apart and scanned. The books were never out of the county courthouse for more than three working days during that time.

Only about two to three more weeks are left in the process to scan all of the books, Bowman estimates.

If an attorney or abstractor comes into the Chancery Clerk’s office seeking a book that is currently out of the courthouse for scanning, a request can be sent to Revolution Data Systems to have the particular information being sought emailed to the person seeking it.

Bowman said her ultimate goal in having the documents scanned is not just to ensure their preservation, but to make the jobs of attorneys and abstractors easier by providing remote access to that information. Providing remote access to sectionals is the next phase of the project. Bowman said she does not have a timeline for completion of that phase.

The cost to scan the documents in the 2016-2017 fiscal year was $43,142 and $21,470 so far for the current fiscal year, which ends at the end of the month. Bowman said the Board of Supervisors provided her office with $50,000 annually the past few years for that purpose.

But not everyone thinks that having access to those records via the Internet is a good idea.

David Stewart, a local abstractor who makes a living researching property records, said he agrees the books need to be scanned but disagrees that the information should be accessible online because he fears for his livelihood. His concern is that if anyone in the world has access to those records via the Internet, attorneys may begin hiring people from other countries to conduct his work.

However, Bowman said that other abstractors have expressed interest in being able to conduct the bulk of their work from home.

Bowman said Pearl River County is one of only a handful of Mississippi’s 82 counties that still keeps handwritten sectional indexes; the rest no longer continue that practice.