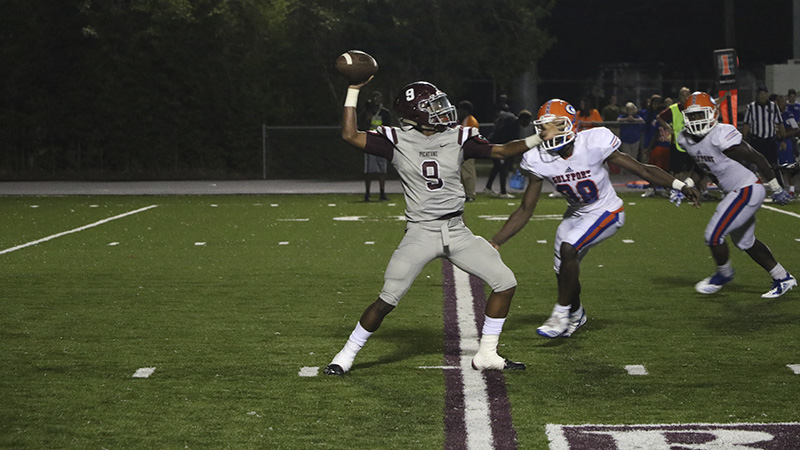 For much of the game, each team traded up in crossing the end zone, ensuring the score was close all the way to the end.

But there was life in the Maroon Tide. With each scoring play by the Admirals, the Tide answered back.

It all came down to the fourth quarter, with the Admirals up by  only two points, the Tide appeared poised to make a march for the other side of the field after a successful play at fourth and long at their own eight yard line when quarterback Jaikal Myers completed a pass to wide receiver Jaylen Hart for a first down.

But the next play ended in Myers’ pass for additional yardage being intercepted by Admirals’ safety Cameron Sparkman with just a little more than a minute left to play in the game.

The Admirals would seal the win by kneeling on their subsequent possession to allow the clock to run out.

“They tackled a little better and made more plays when the game was on the line, that’s what it’s all about,” Maroon Tide Head Coach Dodd Lee said after Friday’s loss.

With 8:53 on the clock in the first quarter, Admirals quarterback Tq Newsome completed a 14 yard pass to wide receiver Zae Crain to put the team on the board early. An unsuccessful PAT attempt by a player not listed on the roster left the score at 6-0.

The Tide would answer back late in the first quarter with 2:50 on the clock when tailback Jairice Travis carried the ball 24 yards. A successful PAT by freshman kicker Arnie Ramirez put the Tide in the lead 7-6.

In the second quarter with 11:51 left to play in the first half, Newsome completed a pass from the 45-yard line to wide receiver Keeilan Thomas. The successful PAT by Durron Myers brought the Admirals’ lead to 13-7.

Seven plays later the Tide took the lead when Travis carried the ball from the Admirals’ 24 for a touchdown. With 8:53 left on the clock, Ramirez’s successful PAT gave the Tide the lead again at 14-13.

Gulfport didn’t waste any time crossing the end zone again. Five plays later the Admirals Jashawn Lee carried the ball from the 49 to the end zone for another touchdown that would give them the lead again after Myers’ successful PAT, bringing the score to 20-14. Seven minutes and nine seconds remained in that quarter.

Gulfport would widen that lead after getting the ball back on a fumble. Four plays later Frost broke through the Tide’s defense from the Tide’s 42 yard line to reach pay dirt, bringing the score to 27-14 with Myers’s successful PAT. Just 3:19 remained to play in the first half at that point.

In the third quarter, the Tide came back on the field after halftime with renewed vigor. Starting at Gulfport’s 48 due to a spirited kickoff return, the Tide would capitalize on ten plays to bring the ball back to the end zone when the Tide’s Myers crossed the line from the one yard line. Another successful PAT by Ramirez would give the Tide the lead at 28-27 with 8:15 left in the third.

Gulfport would take the lead again when they used nine plays to get within striking distance of the goalposts. A 31-yard field goal by Myers gave the Admirals a score of 30-28 with 4:22 left in the third.

In the Fourth quarter the Tide would regain the lead when running back Jortin Raine carried the ball from the 3-yard line for a touchdown with 8:37 let to play. Ramirez’s PAT gave the Tide a score of 35-30.

Gulfport regained the lead on their next possession in four plays when Frost crossed the end zone from the 7-yard line with 7:02 left to play. Myers’ PAT made final score 37-35.

The Tide has bye week next week. The team currently stands at 2-2.