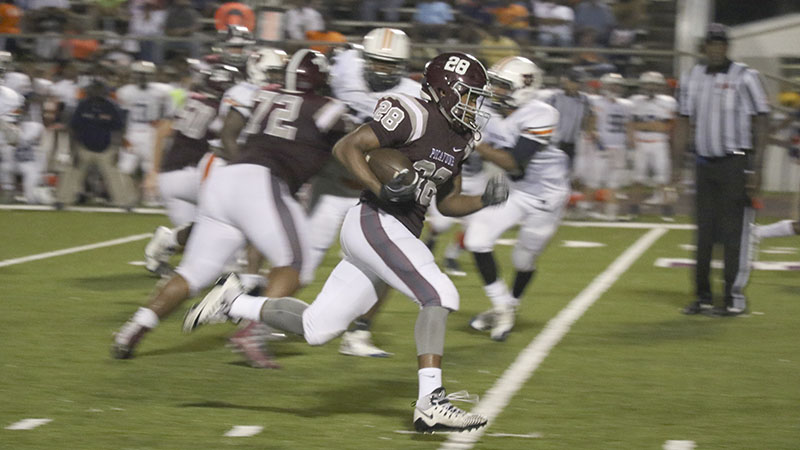 In what could have been a washout of the War Eagles, the Maroon Tide’s offense was still enough to maintain a significant lead against Wayne County, beating the long time rival 60-33 Friday night.

“I’m so proud that we won, but I’m sitting here thinking there are six or eight things we gotta work on,” said Picayune Head Coach Dodd Lee.

The local team scored early and often. Starting with a 75 yard drive through eight plays that ended with quarterback Jakail Myers carrying the ball the final yard to pay dirt with 8:49 left in the first quarter. The successful point after touchdown attempt by Isaac Brice gave the team a 7-0 lead.

A turnover on downs would give the Tide the ball again on the Wayne County 30 yard line. Seven plays later, fullback Kade Turnage delivered the ball to the end zone from the three yard line to give the Tide a 13-0 lead with 2:16 left in the first quarter. Brice’s PAT attempt was no good.

A fumble by the War Eagles in the second quarter gave the Tide possession again at the Wayne County 39. Six plays later, tail back Kaleb Hart crossed the end zone and Brice’s PAT gave the tide a 20-0 lead with 8:10 left in the first half.

Wayne County would have the ball for only four plays before a fumble gave the Tide’s own Elijah Jenkins the opportunity to carry the ball from about the 45 yard line to the end zone, widening the Tide’s lead to 27-0 with Brice’s successful PAT with 6:40 left in the second quarter.

Three plays later, the War Eagles put points on the board when Zhakerreun Wesley carried the ball 50 yards from the halfway mark with 5:40 left before halftime. Nathan Busby’s attempt at a PAT was blocked, putting the score at 27-6.

Eight plays into the Tide’s next possession the team’s lead was widened further when Jairice Travis carried the ball seven yards to the end zone. With 2:12 left in the first half, Brice’s PAT attempt fell wide, putting the score at 33-6.

Wayne County scored two plays later when Wesley carried the ball from the Tide’s 25 to reach the end zone. A two point conversion attempt by Shadamien Williamson failed, leaving the score at 33-12 with 1:28 left before the half.

After halftime, Wayne County took possession and utilized seven plays from their own 40 yard line to complete a scoring play when Kelnevious Walley carried the ball from the 25 make the score 33-18 with 8:35 left in the third. Busby’s PAT attempt was no good.

But the Tide would maintain that lead when Cudevone Jackson returned the subsequent kickoff for a touchdown from downfield with 8:23 left in the third. Brice’s successful PAT brought the score to 40-18

Six plays later the War Eagles drove the ball from their 46 to pay dirt when Wesley completed a pass to Brevin Gandy for a touchdown from the seven yard line.

A series of turnovers would bring an end to the third quarter. With 9:10 left in the game, Hart carried the ball 35 yards to bring the score to 47-25 with Brice’s successful PAT.

Wayne County would turn the ball over on downs after eight plays, allowing the Tide to capitalize on that next possession through six plays from their own 51-yard line when Winston Drain carried the ball from the six yard line for another touchdown with 4:05 left in the game. Brice’s PAT brought the score to 54-25.

Wayne County would fumble the ball on the second play of their next possession, but so did the Tide on their next play, giving the ball right back to the War Eagles.

“We gotta take the attitude that if we got a chance we gotta bury somebody,” Lee said.

Wayne County would use the very next play to add more points to the board when Walley carried the ball 44 yards with 2:28 left to play. Addarius Courtland’s two-point conversion was successful, narrowing the Tide’s lead to 54-33.

But the Tide would widen that lead two plays later when  Travis carried the ball from Wayne County’s 42 yard line for the last touchdown of the game. Brice’s PAT attempt fell wide, putting the final score at 60-33.

Next week, Picayune (3-2) will travel to Gulfport to take on West Harrison.

“We’re just going to watch the film. I know we can get technique better on defense,” Lee said.

In other local action, the Blue Devils beat Long Beach 33-31.