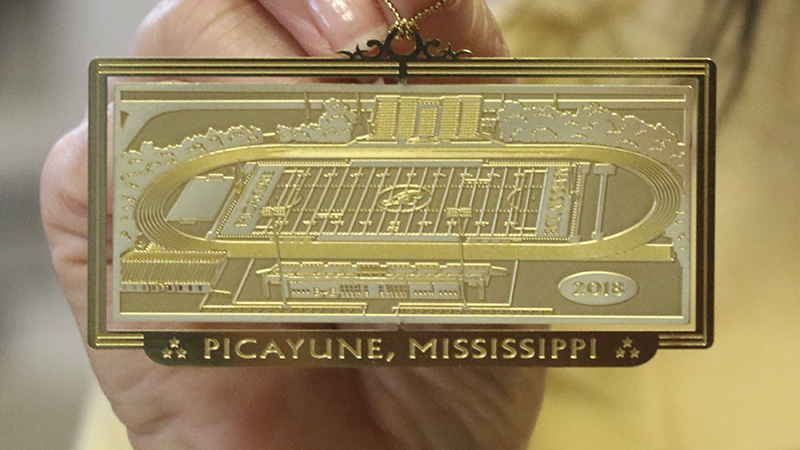 FROM ABOVE: This year’s Picayune Main Street ornament features a view of the Lee/Triplett Stadium from the sky. Photo by Jeremy Pittari

For going on nearly 20 years, Picayune Main Street has been releasing Christmas ornaments inspired by past and current local landmarks.

According to information provided by Picayune Main Street, the stadium was dedicated in November of 1950 and can seat about 4,400 sports fans. Construction of the facility was paid for with contributions from the city’s citizens and funds from Crosby Chemicals Inc.

In April of 2015 artificial turf was installed on the field and in August of 2016 the name of the stadium was changed to the Lee/Tiplett Stadium to honor former head coach Calvin Triplett and current coach Dodd Lee.

Stadium ornaments are $15 each and Beebe said that all of the previous 18 ornaments can be purchased from the Main Street office. Prices vary for the previous ornaments, which include Historic City Hall, Shay engine, Zesto’s, and last year’s ornament, The Clock.

Creation of this year’s ornament was conducted utilizing aerial shots of the stadium, and includes the Maroon Tide logo at the 50 yard line.