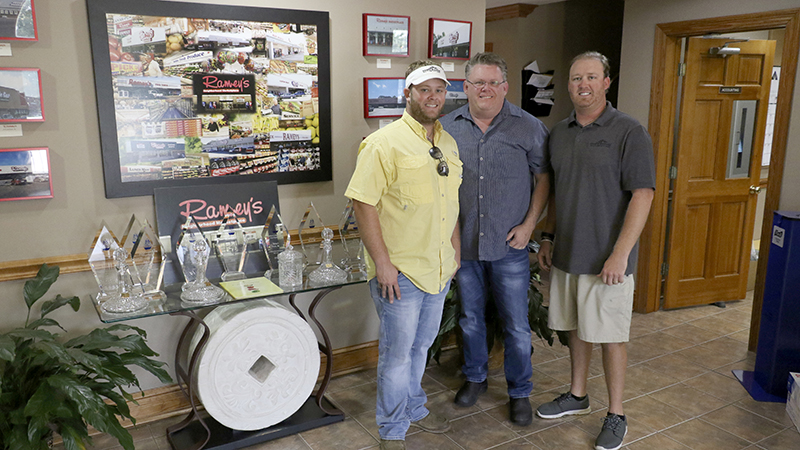 FAMILY OWNED: From left are Ford Ramey, Brad Ramey and Taylor Ramey. The Ramey family has owned and operated grocery stores in Mississippi since 1947. The men stand in front of the many awards the family business has won over the years. Photo by Jeremy Pittari

Many people may have heard the name Ramey’s, especially in Poplarville where the newest and largest grocery store in town just opened. But what they may not know is how the company was founded, and the fact that the family owned business has diversified.

Brad Ramey and his sons, Taylor and Ford, along with his father, Herbert, not only run 23 grocery stores in three states, but Brad’s sons also own a used car business in Purvis and an indoor trampoline park called UpDown in Hattiesburg. Brad’s wife Charlene oversees the operation of an apartment complex and a Microtel hotel in Hattiesburg.

Brad Ramey said his family has been able to branch out into those other businesses due to the success of the grocery stores, the newest of which opened in Poplarville earlier this month.

And their business ventures provide jobs to the communities in which they operate. Brad Ramey estimates that about 1,700 people are employed throughout the various businesses.

It all started in 1947 when his grandfather, Herbert Ramey Sr., opened his first grocery store in Waynesboro on Front Street. It was located near a rail spur so the stock could be easily delivered.

The center of the store featured a custom meat case, where meat was cut to order. Customers could even buy a cooked hamburger in the store.

Then, throughout the 50s and 60s, his grandfather converted two school buses to work like rolling grocery stores, stopping in rural areas so residents could purchase frozen foods, meat and produce. In the early 70s the liability of operating such a service and mass availability of vehicles led his grandfather to cease operation of the rolling stores and focus on the Front Street location.

In the mid 70’s his dad and uncle, Jimmy Ramey, bought the Front Street location from Herbert Ramey Sr., utilizing a Small Business Administration loan. At the age of 10, Brad Ramey remembers playing in his family’s grocery store warehouse.

“I remember the old registers. Pull that arm down and ‘cha ching!’” Ramey said.

After his dad and uncle took ownership of the business, a new store was built in 1979 to replace the Front Street location before they bought additional stores in Butler, Alabama, Stonewall, Mississippi and Chatom, Alabama.

As he grew up, Brad worked in the family business. When he married his wife in 1990, he bought his own grocery store in Bassfield, Mississippi at the age of 20.

For the first three months, he had to use the old owner’s beer permit because Brad wasn’t old enough to buy beer. Later, Brad would also begin purchasing additional stores, starting in Sumrall and Flora, Mississippi.

During his time in the business, he’s learned a number of things; first of which is that buying an existing store is easier than starting one from scratch.

That’s what made the transition in Poplarville smoother five years ago; but the location needed something extra.

“We already had an employee base that was outstanding, all they needed was the tools to take care of the customer,” Brad said.

And that’s what the new location provides, not just for his employees.

“We now have the tools to provide for the community,” Brad said.

And while over the past decade or so, with each remodel or new location, Brad adds sushi, hot meals, a sandwich shop and a salad bar, the base of the business is the meat department. While most big box stores have begun to stock prepackaged items in their cases, for the past three decades the business has offered only USA raised Black Angus beef that is cut at each store by trained meat cutters and butchers.

“Our success is to be the best we can be in what we do, that’s to put the best product out,” Brad said. “I would not expect the customer to buy something I wouldn’t buy myself.”

That dedication to the best meat does not stop at steaks. Ground products are made using only the best cuts, such as sirloin for ground sirloin and round roast for ground round.

But by adding the deli and bakery options to each remodel or new construction he can give his employees additional tools to meet the needs of people living in smaller communities.

“We throw the kitchen sink at them,” Brad said. “Our customers want it just as bad as anyone else does and it’s been very successful for us.”

Over the last decade, his goal has been to add one new store per year and to remodel one existing store a year.

And after all this time, his father is still part of the company. At 77, his father still goes to work every day.

“His existence is the grocery business, he loves it,” Brad said.

Recently, the company added its first location in Louisiana, called Jubilee Foods, located in Pearl River.  Brad said that if the company decides to continue to add more locations in Louisiana, they too will be under the Jubilee banner.