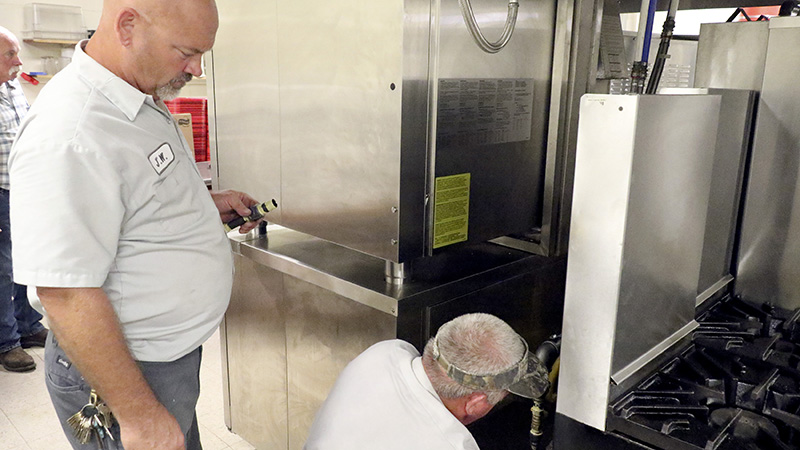 FIXING THE PROBLEM: Picayune School District maintenance employees were repairing natural gas fittings on cafeteria equipment at Roseland Park Elementary Tuesday afternoon after gas leaks were found. The repairs were expected to be complete that day. Photo by Jeremy Pittari

Public Works Director Eric Morris said there have been two recent reports of gas leaks at the school, the first was reported to the city last week. City crews responded and turned off the gas to the campus’ cafeteria, and School District maintenance crews conducted repairs to the problem, which was a leaking plumbing fitting on the school’s side of the utility connection, Morris said.

Monday, city crews received another call of a gas leak at the same school in the morning and afternoon. Morris said the Public Works employees responded both times, as did school maintenance crews. Natural gas service to the school is currently suspended as the District maintenance crew conducts repairs.

Tuesday afternoon crews were in the cafeteria replacing fittings. District Maintenance Supervisor Arnold Smith said he expected the repairs to be complete that day, after which a certified plumber would be called in to conduct a 24 hour pressure test. Smith said the results of the test will be presented to Picayune’s Public Works Department in order to have the service restored.

The Item has received reports via social media that children and staff were moved to the school’s multipurpose room yesterday due to the leak, and that some had fallen ill due to the leak.

Assistant Superintendent Brent Harrell confirmed children and teachers were moved to the multipurpose building and that work was planned to repair the problem. When asked if children and staff had fallen ill due to the leak, he said that there had been reports from about three staff members that they felt ill.

One went to a doctor, and was determined to be fine, Harrell said. He said no children were ill.

“If there was a safety issue, we would not occupy the building,” Harrell said.

Since the cafeteria equipment was down during the repairs, children were given a “brown bag” lunch and allowed to eat in their classrooms Tuesday.

Harrell said that if the problem is not fixed by the start of school Wednesday, the same practice will take place for lunch.

Poplarville students to get free screenings