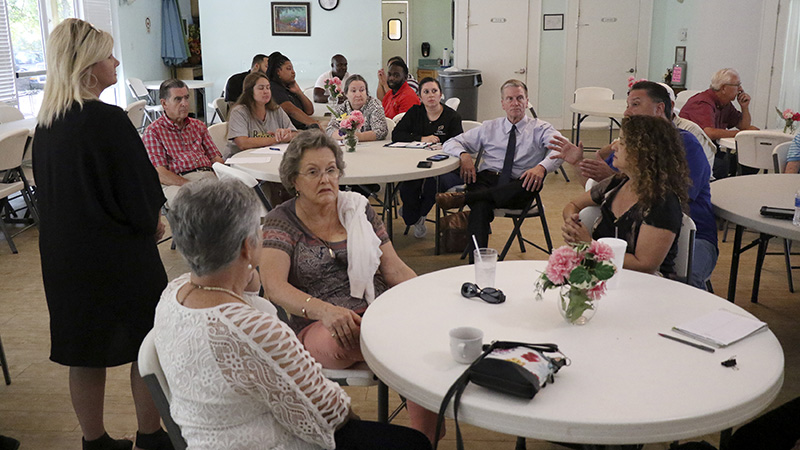 Business owners within Picayune with locations along the path of the upcoming Highway 11 widening project attended a meeting Tuesday afternoon to share their concerns with State Representative Stacey Wilkes.

Most of their concerns centered on how the loss of land currently being used as parking in front of their location would affect their business.

Additional concerns focused on how the median that is proposed in the project, which according to project designs acquired from Mississippi Department of Transportation, runs nearly the entire length of the project from just before Cayten Street all the way to the intersection of Lakeshore Drive. Breaks in the median are noted only in a few areas along that path, including at East Sycamore Street, Highway 43 North, the Emergency Room entrance of Highland Community Hospital, Hayden Oaks Drive and Highland Parkway.

That limited access to the businesses from north and south bound traffic will have a negative affect.

Additionally, putting the highway closer to the front of those businesses will create a safety issue with cars traveling at highway speeds, said Mike Muhoberac, owner of North 11 Diner.

He said that the work will reduce his parking lot significantly, cutting down the number of customers he relies on to help pay his seven full time staff. If there’s less parking, then he will have to cut the number of staff.

While he plans to keep the business open even if the parking is cut, his alternate plan would be to request that the land owner provide additional parking, but that would mean having to close one of the businesses adjacent to his.

Tricia Gipson, wife of Dr. Walter Gipson, said her husband’s practice and the tenants that rent the adjacent business would be affected by the work. In addition to a retaining wall that would be tall enough to obscure the view of the facility, the grade to enter what would be left of the parking lot would be steeper than it currently is.

Gipson said that their tenant, Italian Grill, has indicated that the business may have to leave it’s current location if the project moves forward as planned. Tim Hart, the owner of Italian Grill, confirmed that due to the impact the work would have, there would be a 99 percent chance the business would relocate.

Gloria Glidewell, owner of Handy Cleaners, said she too will be left without parking to her business when the project is complete.

All three entrepreneurs also wondered why a representative of the city of Picayune was not at Tuesday’s meeting and how come the City Council is allowing the project to move forward when it will negatively affect so many local businesses.

Angelle Carbone, co-owner of Dockside Seafood and Specialties, said she would like to know why the pamphlet concerning right of way acquisition provided to her by MDOT representatives was published in 2007. Dockside is located in the path of the second phase of the project to replace the bridge over the East Hobolochitto Creek. That project will require Dockside to close or relocate. Carbone said she would like more up to date information concerning right of way acquisition.

Wilkes said she would take their concerns to a representative of MDOT to seek answers.