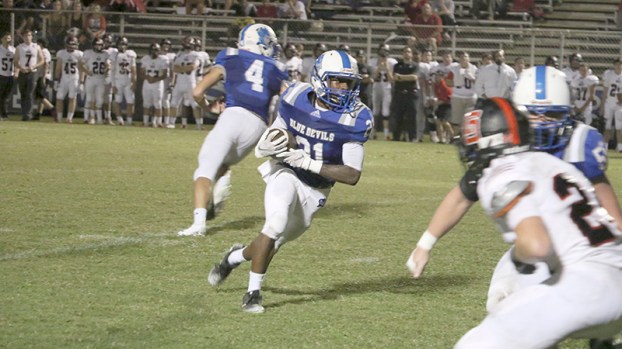 Friday’s matchup between the Pearl River Central Blue Devils and St. Stanislaus’ Rockachaws started an hour late, but was full of back to back touchdowns in the first half.

The Rockachaws put points on the board first, with 11:09 still on the clock in the first quarter, Aaron Rush scored. William Weber’s point after touchdown was good, giving the team a 7-0 lead.

But the Devils didn’t waste time to even the score. Three plays later, Detrich Spikes ran the ball from the Devil’s 27 yard line for a touchdown with 9:33 left in the first.

The Rockachaws would give up the ball on their next possession with a fumble at the 30 yard line, enabling Spikes to utilize the next play to run the ball all the way for a touchdown with 9:15 left in the first. Sam Lambert would complete both PAT attempts, giving the Blue Devils a 14-7 lead.

At first and ten from the Rockachaws’ 34, Delvin Henry Jr., would carry the ball down the field with 8:57 left in the first quarter. Weber’s successful PAT tied the score 14-14.

On the Blue Devil’s next possession, in the second play, Spikes ran from the Devil’s 21 yard line for another big touchdown, with 7:59 left to play in the first quarter. Lambert’s successful PAT gave the Devils the lead again at 21-14.

Again, when the Rockachaws got subsequent possession of the ball, in the first play of that drive, Henry ran from the Rockachaw 19 yard line for another big score. Weber’s successful PAT tied the score once more at 21-21 with 7:34 left in the first quarter.

After the ball changed hands two more times to put the ball back in Blue Devil hands at the team’s 6 yard line, Spikes ran the ball down the field for a 94 yard touchdown with 2:36 left in the first quarter. A botched attempt at the PAT led to an unplanned two-point conversion attempt, which was unsuccessful. The Devils lead 27-21.

In the second quarter, with the Blue Devils two yards from the end zone, Kobe Whitehead crossed into pay dirt with 11:07 left in the first half.

But the Rockachaws began closing that gap in the very next play. At first and ten from the team’s own 28-yard line, Henry ran the ball down the field for another touchdown. With 10:57 left to play in the first quarter, Weber’s PAT brought the score to 34-28.

It would take the Devils seven more plays to carry the ball down the field on their next possession before Spikes carried the ball from the four yard line for another touchdown.

When the Blue Devils punted the ball to the Rockachaws for their next possession, Brandon Bordelon caught it at the one yard line, toted 99 yards to the end zone and brought the score to 41-35 with Weber’s successful PAT.

An onside kick by the Rockachaws gave them the ball back in the punt and three plays later the team gave the ball to Henry, who ran it from the Devils’ 45 yard line for another touchdown.

Weber’s successful PAT with 5:43 on the clock gave the Rockachaws the lead at 42-41, where the score would stay until the third quarter.

After halftime, the Rockachaws would score again through five plays when Henry ran the ball eight yards with 10:01 on the clock in the third. Weber’s PAT brought the score to 49-41.

After turning the ball over on downs, the Devils would see their opponent’s lead widen when Henry ran the ball from the 46 to score with 3:16 left in the third quarter. Weber’s successful PAT brought the score to 56-41.

In the fourth quarter, the Rockachaws would score again with 11:08 left to play in the game when Henry ran the ball from the one yard line to pay dirt. Weber’s PAT brought the score to 63-41.

The Devils would get one last score in before the clock ran out when Whitehead scored his second touchdown of the game, running it from the eight yard line with only 1:38 to play. A successful two-point conversion play by Whitehead brought the final score to 63-49.

Blue Devils Head Coach Jacob Owen said he was proud of how his team played during Friday’s game.

“We fought our guts out. It was a great football game. It came down to a couple plays; they made them and we didn’t. But I thought our kids played extremely hard. I’m proud of them.”

As for the loss, Owen took full responsibility.

“I didn’t coach a very good second half. The kids played good enough to have won,” Owen said.

The Picayune Maroon Tide lost to the Gulfport Admirals 37-35 Friday night. For much of the game, each team traded... read more