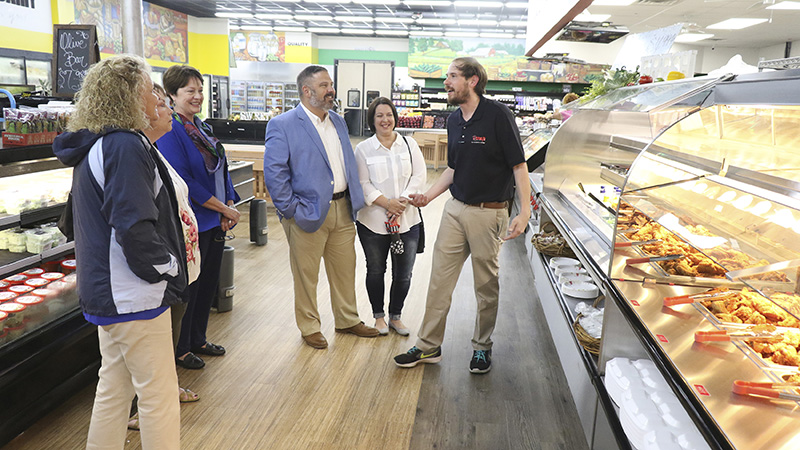 A new shopping center is set to open in Poplarville this week. It’s the new location of Ramey’s and with it will be a larger shopping experience that employs more people.

Thursday, the newest location of Ramey’s, and a much larger version for the city of Poplarville, will officially open to customers.

Brad Ramey, owner of the company, gave city and county officials and educational personnel a tour of the new location earlier this week so they could see the improvements that have been accomplished. He also took the opportunity to thank city and county officials for supporting the project by approving the Tax Increment Financing that helped the project get off the ground. Ramey said that the new development could not have been possible without them.

The new store is located along Highway 11 across from Pearl River Community College. Ramey said he likes the fact that the location is also right next to the heart of the city’s residential area.

While the business will open its doors on Thursday, an official ribbon cutting commemorating completion of the project will not be held until Sept. 12 at 9 a.m.

But most of the other services will be available starting this week, such as the deli, sushi bar, salad bar, olive bar, custom sandwich bar, and a side of the facility that operates much like a convenience store where the fuel center will be built.

Ramey said the new location will employ about 80 people, which does not include the staff that will be working in the pharmacy and the fresh sushi bar.

It also sports a number of energy saving features, such as LED lighting, a special reflective ceiling and emergency generator power backup in case of an extended power outage such as after a major hurricane.

A certified sushi chef has been contracted to operate the sushi bar from 7 a.m. to 6 p.m. each day. During those hours, sushi orders will be made to order and can include raw or cooked dishes. After those hours a case will be stocked with popular dishes.

Customers can satisfy their sweet tooth at the bakery, where confections are made in house, or find fresh cuts of U.S. Black Angus beef or other products at the meat department. The new location also has a floral section and four self-checkout stations.

In addition to two Icee machines that feature six flavors, the new location also has two Coca Cola slushee machines, where customers can place a 20-ounce soda product on the pad and watch it turn icy instantly.

As construction of the shopping center continues, additional businesses are slated to open, including a Little Ceasars in a stand-alone location in the parking lot, along with a nail salon, Mexican restaurant and a rent to own business. Ramey said two store fronts are still available for rent.