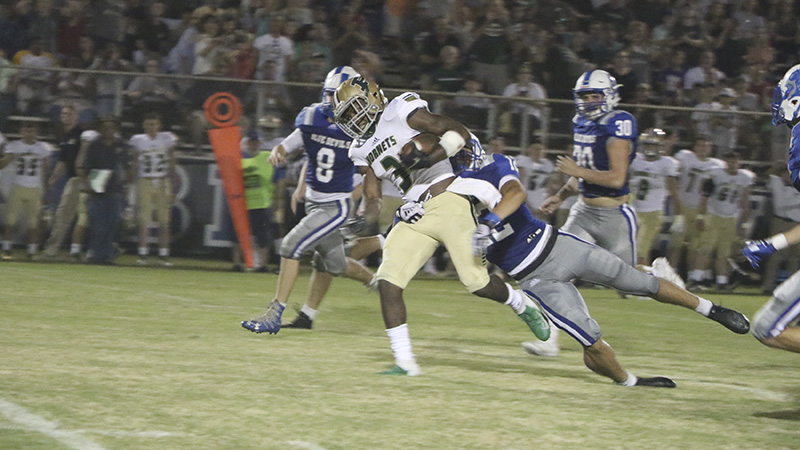 As the score implies, the Hornets dominated not only the scoreboard, but the field as well, maintaining possession of the ball for the majority of the game.

The Hornet’s reign started early too. In less than a minute the Hornets capitalized on two plays that ended with running back Ahmad Bolton toting the ball 33 yards to the end zone with 11:07 left to play. A two point conversion by Bolton started the game with a Hornets’ 8-0 lead.

The Devils would hold onto the ball for 8 plays before turning it back over to the Hornets, who would need only three plays to bring the ball back to the end zone when Caziah Daniels completed a pass to Tyson Holston from the 18 yard line with 6:45 on the clock. Ethan Spiers’ successful PAT put the score at 15-0.

Another turnover on downs would put the ball back in Hornets’ hands. Six plays later Antonio Barnes carried the ball about 48 yards to the goal line. Another successful PAT by Spiers put the score at 22-0, with 2:06 left to play in the first quarter.

The Devils put points on the scoreboard in the second quarter when quarterback Cameron Brunson completed a pass from the 47 yard line to Kobe Whitehead. The successful PAT by Sam Lambert brought the score to 22-7.

The Hornets answered right back in the first play of their subsequent possession, when Daniels toted the ball from the Hornets’ 35 to the end zone, but a penalty brought the ball back to the 30. It would take nine more plays before Bolton crossed the end zone with 2:57 left to play in the first half from the Devils’ 24 to bring the score to 29-7 with Spiers’ PAT.

A final scoring play from the Devils occurred just before halftime when Brunson completed a pass  to Damon Anderson for a touchdown from the Hornets’ 30. Lambert’s PAT brought the Devils to 29-14.

The rest of the game was Poplarville’s. With 4:28 left to play in the third quarter, Holston would carry the ball nine yards. Spiers’ PAT brought the Hornets’ lead to 36-14.

Close to the end of the third, Canaan Ray would return a punt down the field for more than 50 yards for another touchdown. Spiers would complete another PAT with 1:33 left to play in the third, bringing the score to 43-14.

The final scoring play of the game came at 9:06 left in the final quarter, when Hunter Martin carried the ball 13 yards to the end zone. Another successful PAT by Spiers brought the final score to 50-14.

But he does want to see improvement in his team’s offense and defense so they can continue to improve as the season goes on.

In other coverage, the Maroon Tide fell to D’Iberville 49-33 during Friday’s match up.