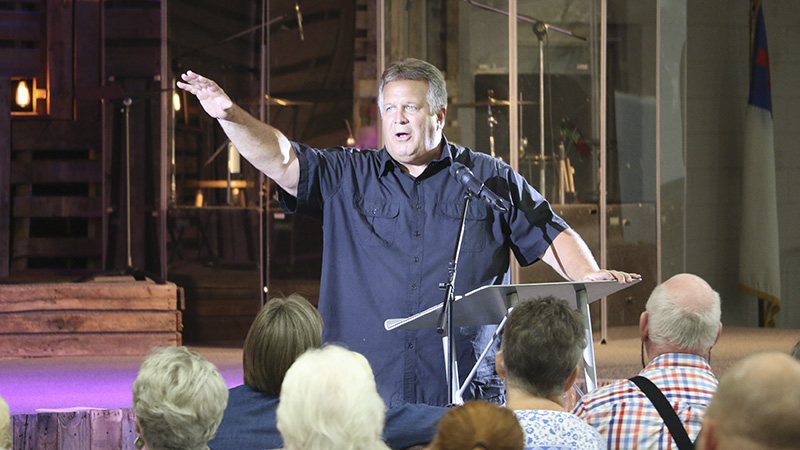 PLAN OF ACTION: Rev. Allen Hickman with Resurrection Life Worship Center led a town hall meeting Tuesday night to organize community members to participate in an effort to deter the establishment of a methadone clinic in Pearl River County. Photo by Jeremy Pittari

This article has been corrected to reflect the movement aims to collect 10,000 signatures on the petition, not 100,000.

Tuesday evening, a plan was laid out at Resurrection Life Worship Center in Picayune to block development of an addiction treatment center just outside the city limits.

According to previous coverage, development of Crossroads Treatment Center was to take place off of Sycamore Road just outside the city limits, until the Pearl River County Board of Supervisors stepped in and used an existing ordinance to block further development of the site. The structure was previously an indoor swimming pool, being renovated by the property owner for use as a clinic.

Now, the company who intended to rent the building, Crossroads Treatment Centers, has filed suit against the Board.

In response to the possibility that Crossroads may still be able to establish the clinic, a town hall meeting was organized at Resurrection Life, where local pastors and community members gathered to hear Rev. Allen Hickman’s plan to prevent the clinic from opening in this area.

Before expressing his “vehement” opposition to the clinic, Hickman started the meeting by saying he did not want to bash the developer of the property, Robert Thigpen, but rather wanted to present facts about the use of methadone as a treatment for opioid addiction and the negative outcomes it can have.

Those negative outcomes included becoming addicted to methadone, death and the high cost of the treatment, which could entail $10 to $15 per treatment, which are required daily, Hickman said.

Hickman said that according to his research, payment needs to be made in cash, which to him is “sketchy.”

He added that there is no need for a methadone clinic in Pearl River County due to the availability of similar clinics in Slidell, La. and Gulfport.

Dr. James Riser was present at the meeting, and said that the effects of methadone have a longer half-life than that of heroin, which is one of the life threatening aspects of the medication.

After Hickman’s presentation, he presented his plan that the community can employ to block establishment of the clinic in this area. It starts with gathering 10,000 signatures of people in the county who are against it to present to the United States District Court for the Southern District of Mississippi Southern Division should the lawsuit move to the next level.

He asked that the petitions be returned to him by Sept. 7.

The next step involves sending mass emails, texts, letters and making phone calls to everyone involved with Crossroads Treatment Centers, including the attorneys associated with the lawsuit. Contact information for those individuals was then passed out to those in attendance

“I want them to shut down their system because the people of Pearl River County pestered them to death,” Hickman said.

In doing so, Hickman advised people to not be ugly when they send messages of opposition about the clinic.

The final phase of his plan is for pastors across the county to organize the members of their churches and for people to pray.

Meal programs vary across the county