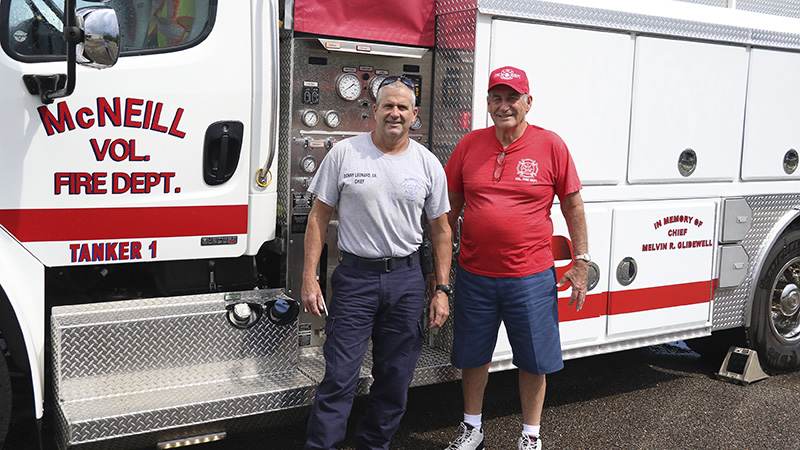 DOOR TO DOOR: From left are McNeill Volunteer Fire Chief Donny Leonard Sr., and Don Jones. Jones is the only person who officially represents local volunteer fire departments in Pearl River County to collect donations that help in their day to day operation. Photo by Jeremy Pittari

Residents within the McNeill Fire District may have a visitor at their door over the next month seeking donations for the volunteer fire department.

McNeill Volunteer Fire Chief Donny Leonard Sr., said that there will only be one official person going door to door seeking donations, and his name is Don Jones. A photo of Jones will be posted on the fire department’s Facebook page to ensure that people aren’t scammed by an imposter who was recently reported to be in the area.

Those reports of a potential scam involved the imposter posing as a representative of the Carriere Volunteer Fire Department seeking donations, according to recent coverage.

But this time Jones will be officially collecting those donations for use by the department to cover the cost of a new fire truck and turn out gear for two new volunteer firefighters. Leonard said the turnout gear for those two new members will cost about $5,000.

The additional fire truck allowed the department to build a second station in the Millard area, dropping the fire insurance rating from a 10 to a seven, meaning residents in that area saw their insurance rates also drop, Leonard said. The McNeill Fire District encompasses 60 square miles within Pearl River County.

Any person who donates $30 or more, will be entered into a drawing for one of three $100 Walmart gift cards.

Anyone with questions about anything related to the fire department in Carriere is invited to attend a Board of Directors meeting, Banks said. The next one is scheduled for Sept. 13, at 7 p.m. in the fire station on Highway 11 across from Pearl River Central high School.