Getting kids excited for school 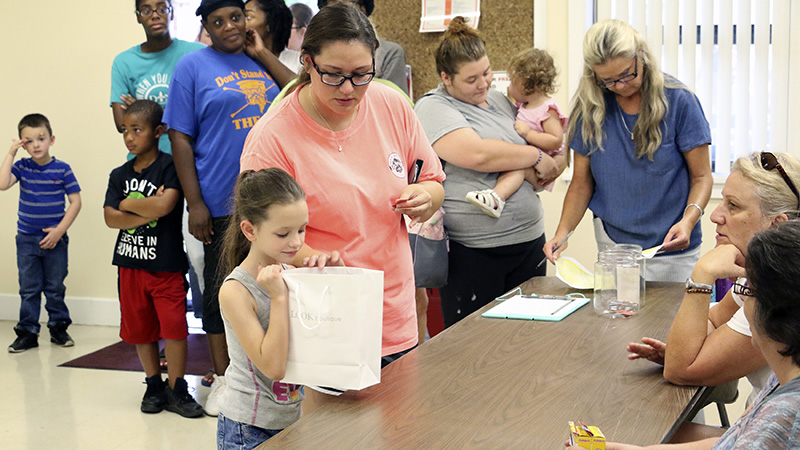 Lunch and supplies: Residents of public housing in Picayune were treated to school supplies and a free lunch during a joint effort between the Picayune Housing Authority, Picayune Police Department, American Lung Association and House of Refuge. Photo by Jeremy Pittari

Families living in public housing within Picayune were treated to lunch and provided school supplies Thursday afternoon to get children excited about going back to school.

The group effort, put together with help from the Picayune Police Department, Picayune Housing Authority, American Lung Association and House of Refuge, provided registered residents of public housing with school supplies along with a hot dog, chips and a drink.

Ruby Upton, executive director for the Picayune Housing Authority, said the event began as a way to try to provide supplies to the families living within public housing, but budget cuts limited what the local organization could do on its own.

A partnership with the other organizations allowed the effort to grow, and eventually be able to provide the children with a number of school supplies, including crayons, tissue, pencils, toothpaste, toothbrushes, paper, folders, glue, rulers and scissors. Each organization pitched in different supplies.

American Lung Association Health Promotions Manager Brittney Perkins said the organization was able to not only provide the food for the event, but also some inspirational messages to entice children to stay smoke free and become a leader in their community. Perkins also brought gum for the kids that says, “Blow bubbles, not smoke.”

House of Refuge Worship Leader Jennifer Helpler said the church helped by bringing supplies and wanted to share the message that church is a safe place.

Some items were also provided by the Picayune Police Department, which included T-shirts, chips and drinks that were left over from the department’s most recent Summer Camp.  Capt. Theresa Milar said the aim of the event was to get the children excited about going back to school.