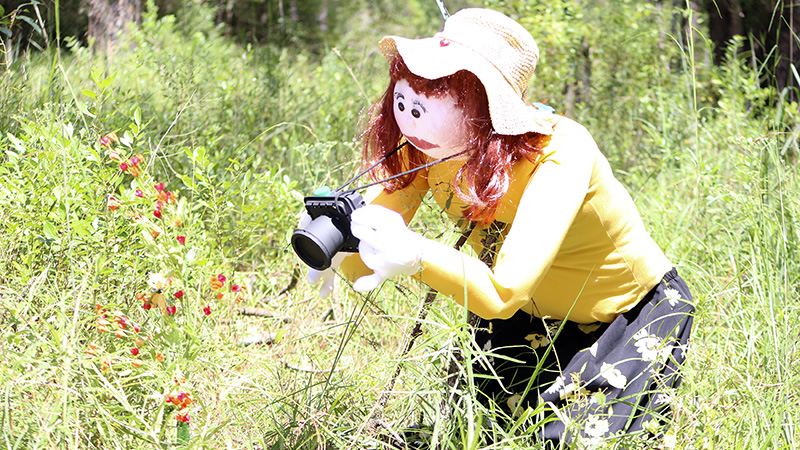 AVID PHOTOGRAPHER: This scarecrow created by members of the Greater Picayune Area Council includes a mock camera made of everyday items, such as a plastic cup and fruit container. It’s located near the entrance to the Crosby Arboretum. Photo by Jeremy Pittari

Artistic versions of scarecrows are popping up along the paths within the Crosby Arboretum, created by members of the community.

They’re being made by individuals, members of local clubs and representatives of local businesses. Scouts in a Boy Scouts club from Wiggins set up scarecrows made of Halloween costumes depicting super heroes, while representatives of Nissan of Picayune set up a scarecrow lounging in tires stacked vertically.

One of the more detailed scarecrows so far is of a woman taking a picture of flowers at one of the Arboretum’s exhibits. The “camera” is made out of a fruit container, plastic cup and bottle cap, complete with a printout of the image being “taken.”

Arboretum Customer Service representative Kimberly Johnson said she started the idea of showing scarecrows at the Arboretum as an extra attraction for visitors to enjoy while they tour the facility.

When Johnson started the project several years ago, she just focused on asking schools to participate. But last year she said she decided to include the entire community.

There’s also a competitive side to this project. Visitors of the Arboretum will be given a ballot they can use to vote for their favorite scarecrow. The winning scarecrow will earn its creator, club or business free passes to the Arboretum, Johnson said.

As more scarecrows are added to the Arboretum, Johnson said she will create maps to denote the location of each creation so visitors can find them easily.

Anyone who would like to enter a scarecrow into the project can contact Johnson at the Arboretum at 601-799-2311.

The scarecrows will be on display through November.