After one project approved, Breland uses “division” to pitch another 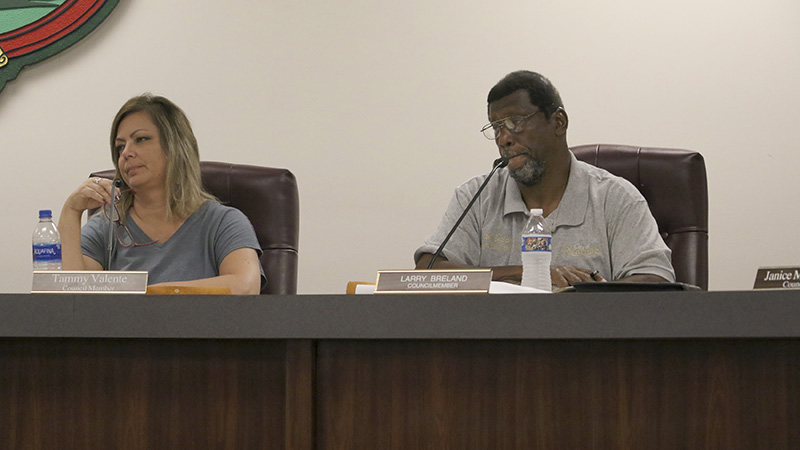 recurring discussions: At right, Councilor Larry Brleand asks his fellow Councilors why he can never get a project approved within his, or Lynn Bogan Bumpers’, precincts. At left is Councilor Tammy Valente. Photo by Jeremy Pittari

On the heels of the recent approval to install a fence at a cemetery on Eighth Street, Councilor Larry Breland has now turned his attention to a fence at a park off of Beech Street.

Discussion related to replacing that damaged fence led to another accusation by Breland that the rest of the City Council is against conducting work within Precincts I and II, the precincts he and Lynn Bogan Bumpers represent.

Now, a 900-foot long section of the fence needs to be replaced.

The original fence was six-foot high and had barbed wire on top. Morris said the proposed repair would entail a four-foot fence with two gate access points.

Morris said that since it’s close to the end of the fiscal year, there are not enough funds in the Parks and Recreation fund to conduct the repair, which is estimated to cost $8,774.

When Councilor Wayne Gouguet asked why the fence needs to be replaced, especially since there isn’t a playground at Snyder Park, Councilor Larry Breland began his accusations that requests in Precincts I and II are never approved.

However, a long-standing request from Breland over the course of the current fiscal year for a fence at the Eighth Street Cemetery was just approved by the Council earlier this month.

When the matter came down to a vote, Councilor Lynn Bogan Bumpers and Breland voted for the repair of the fence, while Gouguet, Mayor Ed Pinero and Councilors Tammy Valente and Jan Miller Stevens all voted against.

“You all have shown us that our two little votes don’t mean nothing,” Breland said after the motion failed. “We gonna go back to Jim Crow.”

After that discussion, the Council approved a motion to advertise for bids to conduct drainage work near a business located at 318 Memorial Boulevard. The work is needed to address erosion problems at the business. Estimated costs to conduct the repairs total about $120,000.

The next Council meeting will be Sept. 4 at 5 p.m. in City Hall.

No tax increase proposed in Picayune