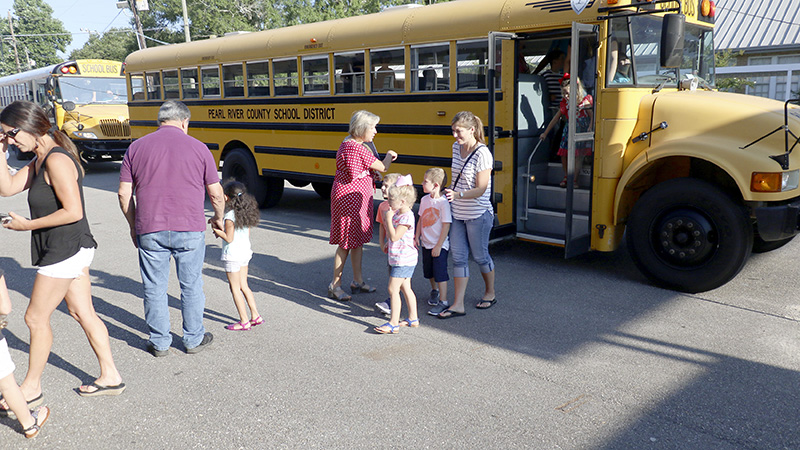 ORIENTATION: Parents and their soon-to-be kindergarteners within the Pearl River County School District rode the bus to campus Tuesday morning as part of a safety program to teach children about bus safety and allowed parents to see how their children would be transported to school each day. Photo by Jeremy Pittari

Tuesday morning buses within the Pearl River County School District started running their routes, not to pick up students for class, but rather to pick up soon-to-be kindergarteners and their parents.

District Transportation Director Lisa Beech said she got the idea to allow parents to ride with their children to school while attending a National Association for Pupil Transportation conference in Georgia.

The aim is to allow the children to ride the bus for the first time with their parents so they won’t be scared on the first day of school, set for Aug. 6 this year.

It also gave parents an opportunity to see how their children will be transported to classes.

“Sometimes it’s harder on the parents than the kids,” Beech said.

On the way to the District’s elementary campus, parents and children heard from the bus driver about proper loading and unloading procedures and how to properly sit in their seat.

After they arrived at the campus, the visitors were greeted by cheerleaders, District staff and provided with morning refreshments before the principal spoke to the group about the upcoming year.

On their way home, the bus drivers went over proper evacuation procedures, emergency exits, what to do if a stranger gets on the bus and how to react during inclement weather situations while on the bus.

“We want to keep them as safe as we can,” Beech said.

With the start of school coming up in less than two weeks, Beech would like to remind all motorists that it’s illegal to pass a stopped or stopping school bus. Once the driver activates the red lights and stop sign, motorists should prepare to stop for the bus in both lanes of traffic. Beech said that on average she receives reports of motorists illegally passing a bus at least daily while school is in session. Violators should know that tag numbers will be provided to the appropriate authorities. Beech said judges within this county strictly enforce the no passing law.