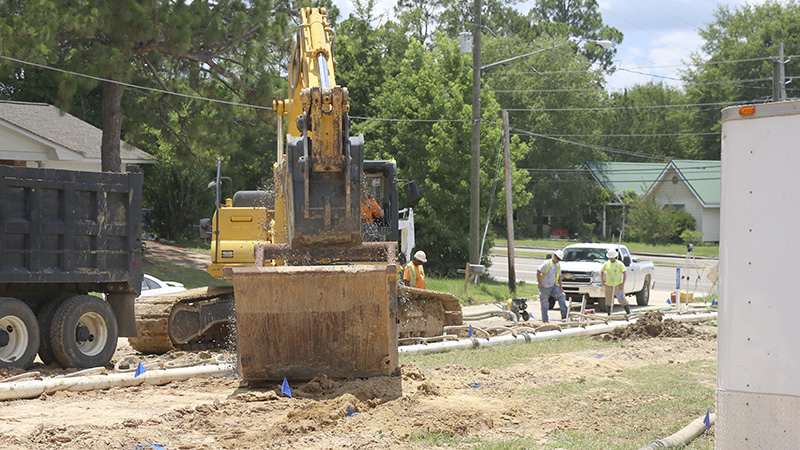 BASELINE: Contract workers repairing wastewater lines along Sheppard Boulevard in Picayune had to replace a third of the line with new pipe. Photo by Jeremy Pittari

Repairs to Picayune’s wastewater system are still underway, with current work taking place along Sheppard Boulevard and in the Westchester subdivision.

Pearl River County Utility Authority Executive Director Ray Scott said crews are currently working in the Westchester subdivision to conduct repairs to the aging wastewater system. He expects the work to continue for some time before crews move on to other areas of the city.

A major repair to the system is also underway along Sheppard Boulevard. Scott said that the process involves draining the ground so crews can dig to the wastewater lines. Motorists and residents in that area may notice that water is continually draining down the road.

Scott said he expects the repairs to be expensive as a result of the complicated nature of the work and the fact that a third of the line had to be dug up and replaced with new sewer line.

The other two-thirds of the line was repaired through a process of lining it with a special polymer to reinforce it.

Scott said that during the Board’s most recent meeting last week, a motion was approved to accept the contract the city of Picayune established to move utilities along Highway 11 in preparation for the widening of the highway by the Mississippi Department of Transportation.

According to previous coverage, the City Council approved a motion to issue the bid for the work to T.L. Wallace Construction Inc., at a cost of $2.14 million. A lower bid was submitted by another company, but aspects of the bid contained errors, so it was rejected.

Even though the Utility Authority owns the wastewater system in Picayune, and the city of Picayune owns the water and natural gas lines, the two entities entered into an agreement to have all three lines moved at the same time to save time and money.