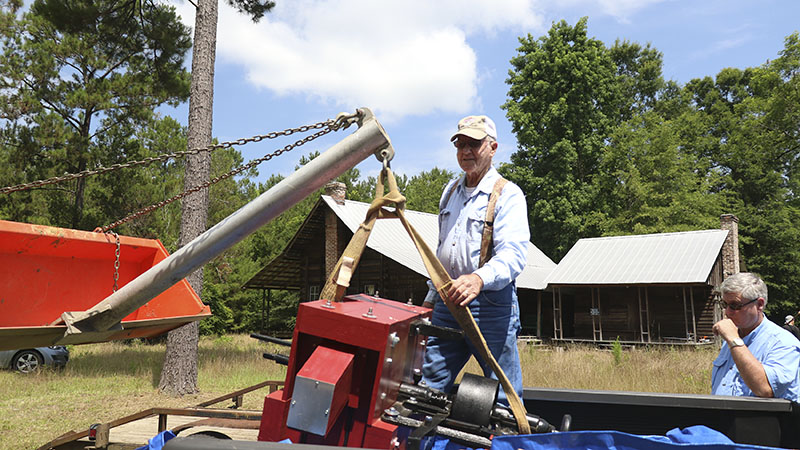 UNLOADING: Marlon Holder, center, oversees the unlaoding of a gristmill he restored using only metal pieces found under the remnants of a shed at the Shaw Homestead, pictured in the background. Holder then put the gristmill together so it can be used for demonstrations at the historic site at a later date. Photo by Jeremy Pittari

One of the last improvements at the Shaw Homestead was installed Friday morning near the corn shed, a rebuilt gristmill.

A gristmill is used to grind corn into a variety of food items depending on how fine the grain is ground.

With a simple adjustment, it can turn corn into grits, corn meal and if it is in good shape the device could make corn flour. The gristmill that was rebuilt for display at the Shaw Homestead however was in need of repair three years before the previous owner stopped using it, said Marlon Holder. Holder rebuilt the machine from parts found under a once dilapidated shed on the property.

The parts were brought to Holder, who not only had to refurbish every piece found under the shed, but remake or manufacture a number of others.

Holder said it took two to three months to make the necessary parts and put it back together. That included making the frame from pine. Holder said the device at the Shaw Homestead will need a small engine, or a properly equipped tractor, connected to a flat belt to power it.

Since a gristmill’s grinding stones are encased in the wood frame of the device, the only way to clean it back when these devices were used by farmers in the 1800s was to run 25 to 50 pounds of corn through it. That first batch of ground corn would then be used to feed livestock. The rest would be processed for food for the farmer and the family.

Holder became interested in gristmills about 16 years ago after his uncle’s passing. He said his uncle owned some examples of the equipment.

Now, Holder has a collection of his own, a total of five of various sizes.

Not only does he rebuild gristmills for clients, he also performs demonstrations on their operation at the state fair in Jackson.

Friday morning, a team of volunteers showed up to install the mill at the rebuilt shed where the mill was found.

Land Trust for the Mississippi Coastal Plain Executive Director Judy Steckler said the mill will now be used for demonstrations during tours of the old homestead.

The Shaw Homestead became part of the Land Trust after it was purchased from the heirs. No one has lived in the adjacent home since 1969, when the previous occupants evacuated prior to Hurricane Camille.

Today, the home, and outlying buildings, all serve as a reminder of what life was like in the 18th century. Steckler said restoring the home and land is part of the Land Trust’s goal to provide an experience to the youth of today.

She’s currently applying for grant funding to make that mission a reality. The funding will help pay for bus drivers and the necessary fuel so students can take field trips to the homestead and see how people used to live and how much hard work went into the production of food.

To reach that end, she plans to start holding planning meetings in the Poplarville area. She is looking for community members to not only volunteer, but also provide insight into the best way to teach young people about life in the 1800s.