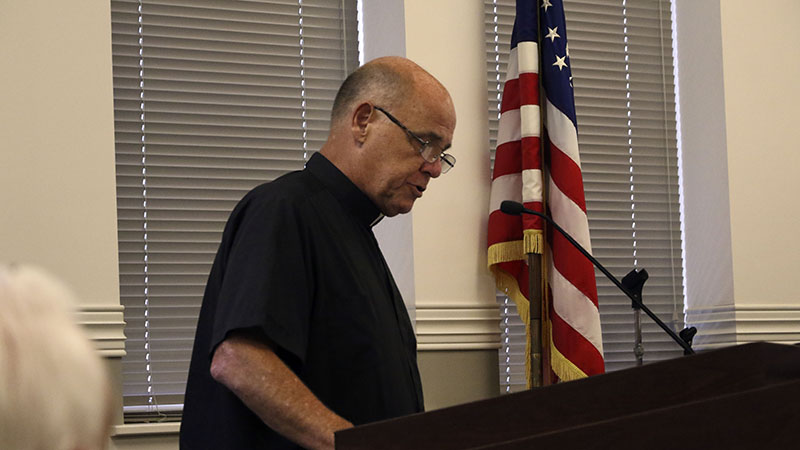 words of wisdom: Fr. Jonathan Filkins addresses the Picayune City Council during Tuesday’s meeting about the need for elected officials and those who work for the city to remember that “there are things we just don’t do,” and avoid letting “wagging tongues” issue statements that can’t be rescinded. Photo by Jeremy Pittari

Picayune’s City Council is moving forward with work to relocate utility lines in preparation of the widening of Highway 11 by the Mississippi Department of Transportation.

During Tuesday’s Council meeting, Councilors approved entering into a contract with T.L. Wallace Construction Inc., who sent the lowest and best bid of $2.14 million.

A lower bid of $1.91 million was submitted by DNA Underground LLC, but there were issues with that bid, according to previous coverage.

Wallace said that the city has received a letter from MDOT Southern District Commissioner Tom King assuring them that the project will proceed, alleviating concerns that the movement of the utilities will not incur an unnecessary expense should the widening project be delayed again. He said that the project is slated to begin in the spring of 2019, and will take about 18 months to two years to complete. Wallace estimates the work to relocate the utilities to take about six months, putting a tight timeline on the city’s part of the project.

A third of the cost to relocate the lines will be incurred in MDOT’s requirement that roads and driveways that tie in to the highway be repaired during the relocation process. Wallace said that cost could be reduced if the city can work out an agreement with MDOT to lessen the requirements. If so, those savings will be passed down to the city.

Phase two of the project, which entails building a new bridge across the east branch of the Hobolochitto Creek, is slated to begin in spring of 2020. When asked for a guarantee that phase two of the project will also take place, Wallace said that while he can’t speak for MDOT, the agency is currently in the process of securing right of ways for that phase.

When the second phase starts, it will entail a second round of utility relocation. One of the lines in question is a large water main that runs near the current bridge. Wallace said that line would not need to be moved if MDOT decides to build the new bridge on the east side of the current bridge. The second phase of the project will require the city to relocate utility lines from the bridge to the intersection of Fourth or Fifth Street, Wallace said.

Widening of Highway 11 will take place from the intersection of Lakeshore Drive to Cayten Street, but was initially slated to take place all the way to the bridge, according to previous coverage.

Wallace said the reason the widening project was cut from the base of the bridge to the intersection of Cayten Street was to allow enough room for realignment of the highway to the new bridge.

For more coverage of Tuesday’s meeting, see Thursday’s edition of the Item.