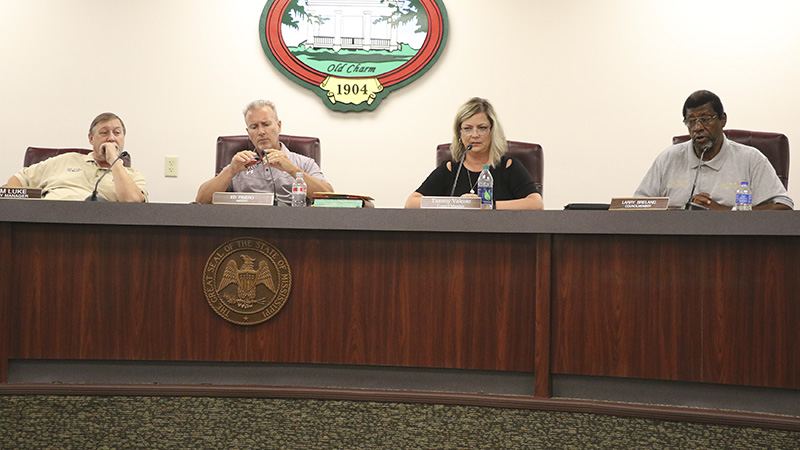 Center from left, Mayor Ed Pinero and Councilor Tammy Valente sit next to each other in a previous Council meeting held before the ongoing pandemic forced the most recent meetings to take place via teleconference. File Photo by Jeremy Pittari

What started as a routine meeting of the Picayune City Council turned divisive yet again, but this time the division was over whether the city manager had been recording private conversations with the city’s councilors.

At the end of the meeting, Councilor Wayne Gouguet turned to City Manager Jim Luke and asked him if at any time during his time in that position if he had recorded a private conversation between himself and any of the members of the Council.

Nearly 30 seconds passed in silence before Councilor Larry Breland objected to Gouguet’s line of questioning, stating any such matter should be brought up in executive session.

When asked, city attorney Nathan Farmer said that according to the state’s open meetings act, personnel matters are typically discussed in executive session, however the Council has typically not restricted topics discussed during the section of the meeting entitled “Miscellaneous Council Member’s Business,” which was the point in the meeting when Gouguet asked the question.

Despite Breland’s objection, discussion of the matter continued, where Gouguet alleged that at some point, Luke recorded a conversation between he and Councilor Tammy Valente. Even though Luke never answered the question during Tuesday’s meeting, Valente claimed she had hard evidence to back up the allegation, and offered to share it with Breland.

Because Mississippi is a one party state, meaning that it’s legal to record a conversation between two or more people so long as one person involved is aware it’s being recorded, such an action is legal, Farmer said.

Gouguet said that while it may not be illegal, he felt for an employee to record a conversation with their boss is worrisome.

When Breland continued to say that he objected to the matter being discussed in open session because it could tarnish Luke’s reputation, Valente said, “He’s not innocent.”

Gouguet added, “I think that we’ve got to be able to have frank discussions with the people that work for the Council and I don’t know you can do that if I think my conversation is going to be taped and potentially played to other people,” Gouguet said. “When I heard this, that we were being taped, I was furious. I felt violated…”

Valente added that her concern is that at times, during frank discussions, emotions could lead to comments being made that could be used out of the proper connotation.

At the end of the discussion, the Council agreed to hold a special call meeting in executive session within the next week or two.