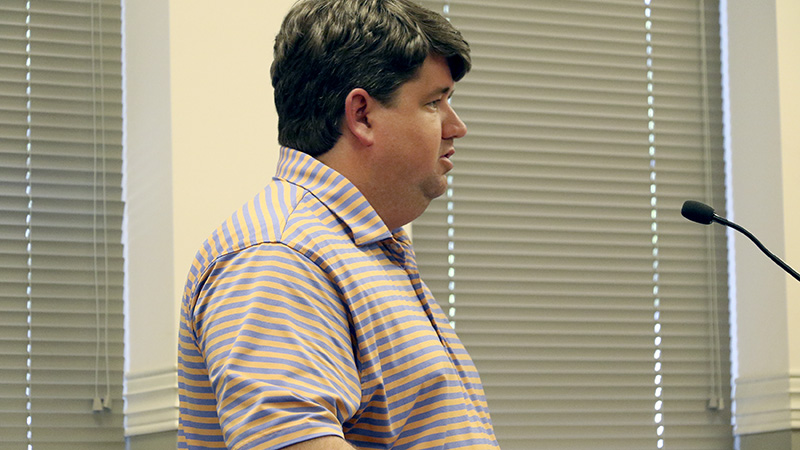 NECESSARY REPAIRS: Brooks Wallace presents information about a drainage issue in the city of Picayune that could lead to the damage of a business if it’s not addressed. Photo by Jeremy Pittari

A failed motion to apply for grant funding by the Picayune City Council led to a lengthy discussion about alleged division within the city’s administration.

The failed motion came at the end of Tuesday’s meeting, and involved applying for grant funding from the Lower Pearl River Valley Foundation to conduct improvements to Leola Jordan Park and J.P. Johnson Park. Councilor Lynn Bogan Bumpers made a motion to approve applying for the grant and Councilor Larry Breland seconded it. When it came time to vote, Mayor Ed Pinero, Breland and Bumpers vote in favor of applying for the grant, while Councilors Wayne Gouguet and Tammy Valente voted against it. Councilor Jan Stevens Miller was absent from the meeting, leading the matter to fail due to a lack of sufficient votes.

Breland then asked Gouguet and Valente why the voted against applying for the grant. Gouguet said he felt more needs to be done at Friendship Park, the city’s central park, such as repairs to Kid’s Kingdom, the park’s playground equipment.

Valente said she also voted against the motion because repairs are needed at Friendship Park and because none of the other Council members asked her if she wanted to add other parks to the grant request.

Breland said the apparent division between the Council sends a negative message to the public that he and Bumpers can’t get work done within their respective precincts.

Bumpers said work is needed at the parks in her precinct because kids that play there can’t afford to go to Friendship Park.

At the end of the meeting, Rev. Brian Dease spoke to Pinero specifically about the need for him to bring the Council together and end the division.

He also expressed his disapproval concerning a previous story published by the Item about segregation at the city cemeteries. He said while there was no law that segregated the cemeteries, there was “an understanding.”

“None of us ever knew we had a choice,” Dease said.

He also charged Pinero to keep his promise made during a previous conversation concerning installation of a wrought iron fence at the Eighth Street cemetery. Pinero said he intended to keep his word.

The Council also discussed a need to repair a drainage feature on Memorial Boulevard to prevent damage to a nearby business. Brooks Wallace with Dungan Engineering said the work will address an aging wooden barrier, which when it fails will potentially affect the neighboring business during a heavy rainfall event. Wallace estimates the cost to repair the problem will be about $125,000. The Council approved a motion to engage Dungan Engineering for its services to design the repair.

— Approved a motion to accept the Mississippi Local Mosquito Control Support Grant, which provides money to purchase equipment and chemicals used by city employees to control the mosquito population.

Supervisors to discuss opposition to establishment of addiction clinic