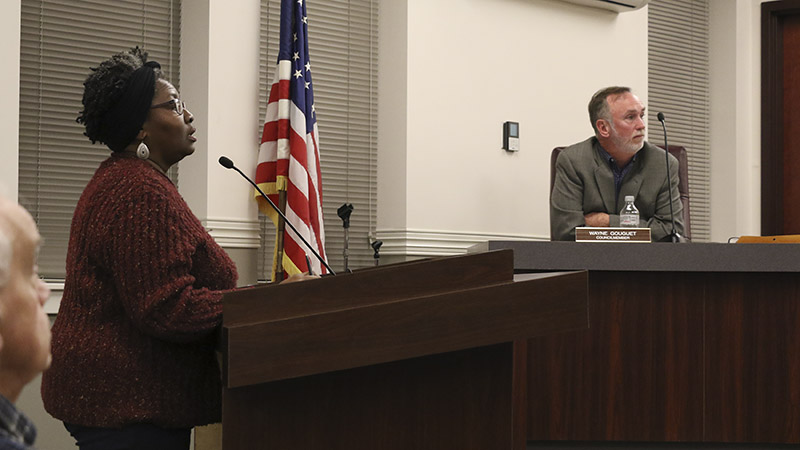 ASKING FOR ANSWERS: At left, city resident Martrenia Hawkins asks the Council for clarification about why the installation of a wrought iron fence around the Eighth Street Cemetery in town was not added to this fiscal year’s budget. At right, Councilor Wayne Gouguet looks on. Photo by Jeremy Pittari

Contention concerning the lack of budgeting to install a wrought iron fence around the Eighth Street Cemetery in Picayune continues to dominate discussions at Picayune City Council meetings.

After the Council handled several routine matters, Councilor Larry Breland brought up the topic of the fence, and also asked why a sheet was distributed at the Nov. 7, Council meeting outlining capital expenses at the city’s various parks.

City Attorney Nathan Farmer said the reason the sheet was not discussed is because the topic was not part of the agenda.

Breland said that he has asked for a similar list of expenses at the parks, but his request would add the total expenses, including maintenance and utility costs.

He then moved on to Gouguet’s comment about the fence at the Eighth Street Cemetery being an unnecessary expense in previous coverage by the Item.

“This divisive issue is getting worse,” Breland said.

Gouguet said the reason he feels money within the cemetery fund should be saved is because plots in city-owned cemeteries are running short. He said there are only a handful of plots left in the Eighth Street Cemetery, and as such everyone within the city who wants to be buried in a city-owned cemetery will all be interred at the new cemetery on Palestine Road, which Breland uses as an example for installing a fence at the Eighth Street property. Breland’s contention is that the Palestine Road Cemetery received a new wrought iron fence, so “what’s good for the goose is good for the gander.”

Gouguet feels that the money currently in that fund should be reserved for buying new land since he estimates even the new cemetery may only have a ten year life span in relation to available plots.

After the Councilors finished their discussion, which came to no agreement between the two, city resident Martrenia Hawkins took the floor to express her concern about the Council’s division on the cemetery matter and asked for more information.

After Breland repeatedly said the funding is there for the fence and the Council should agree to install it, Gouguet said that just because there is money in a fund, the Council shouldn’t spend it all until there is nothing left.

Hawkins then asked the Council to come together to do what is right.

Rev. Brian Dees also addressed the Council, asking for the fence to be installed at the Eighth Street Cemetery.