Utility Authority has new Board member 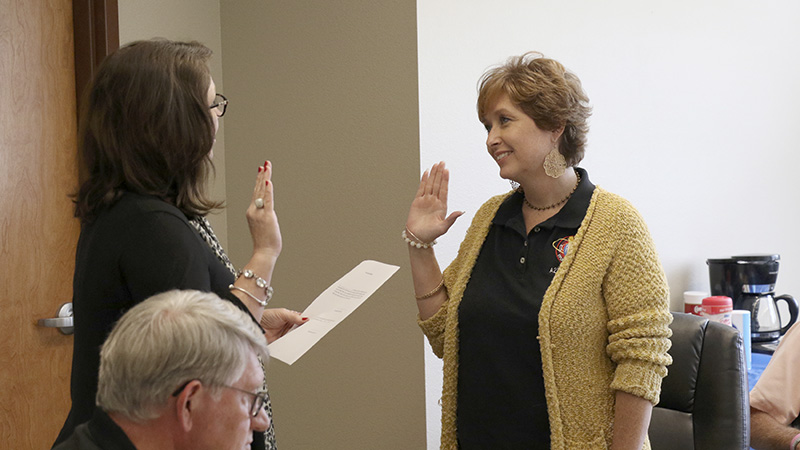 OATH OF OFFICE: Tabitha Butler was sworn into the Pearl River County Utility Authority’s Board of Directors during Thursday’s meeting. Photo by Jeremy Pittari

A new member of the Pearl River County Utility Authority was sworn in during the Board of Directors meeting Thursday afternoon.

After officially becoming a part of the Utility Authority’s Board of Directors, she was appointed as the Board’s treasurer. Board President Mike Pind also announced that fellow member Marcia Johnson has decided to stay on the Board after announcing last month that she intended to step down.

Another change was also approved by the Board during Thursday’s meeting. The meeting time was officially moved from 2:30 p.m. to 5 p.m. the third Thursday of each month.

In other business, the Board heard from Executive Director Ray Scott about the current revenue and expenses.

On the maintenance side, there was a $22,000 expense to repair the Neal Road treatment facility’s ultraviolet light system. Scott said a component in that equipment failed, prompting a need for the repair.

During the engineer’s report, Vernon Moore said that more than a dozen manholes in one drainage basin of the city of Picayune were determined to be buried under asphalt. Moore said it’s a long-standing problem that goes back several administrations, prior to the current one. Some of the manholes have been buried under six feet or more of asphalt. He said that future instances of the problem should be avoided due to the current working relationship between the Utility Authority and the city.

As for the work planned by the Mississippi Department of transportation to widen Highway 11, Moore said plans to relocate Utility Authority water and sewer mains are drawn up and have been submitted to MDOT. Moore said MDOT has approved the agreement between the two agencies, but funding to conduct the work has yet to be approved by MDOT.

Installation of sewer lines in the Eagle Heights subdivision is moving a step closer to beginning. Moore said he expects the design phase to be complete within the next two weeks, and a meeting has been set between Utility Authority representatives and homeowners on Oct. 24.

The next Board meeting will be at 5 p.m. Nov. 16 at the Neal Road wastewater treatment plant.