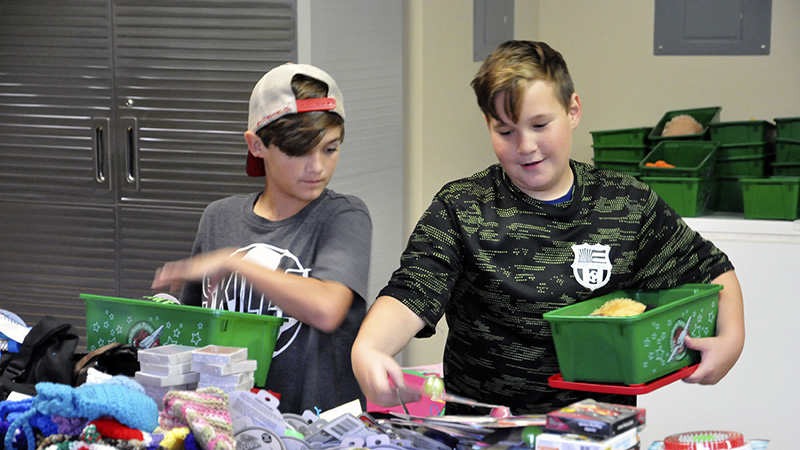 From left, Jadyn Johnson and Aaron Williams pack items such as toothbrushes, soap, crayons and others into a shoebox that will be shipped to children in underdeveloped countries. Photo by Victor Tun

Operation Christmas Child is a project hosted by Samaritan’s Purse, which is a nonprofit Christian organization that spreads the love of Jesus Christ through the gift of a Christmas shoebox.

Each shoebox contains nine essential items such as a toothbrush, soap, a washcloth, crayons, a notebook, a pencil sharpener, pens or pencils, a hairbrush or comb and a stuffed animal.

This year, a soccer ball is included in the shoeboxes and the PRCAA Warriors president and coach Ivan Foster decided to join the cause.

“Cindy Seal, who attends my church, has a video where it shows a kid about 12-years-old receiving his shoebox and playing with a soccer ball he received,” Foster said. “As the years went by, he became a missionary and you can see him playing soccer with kids around his community. I thought it would be a great idea to let the team hear that message and bring them together to help other kids around the world enjoy a merry Christmas.”

Operation Christmas Child is an organization that sends over two million shoeboxes around the world.

“The support of the community has been amazing,” Kristie Seal, owner of Dash Forward Boutique, said. “We have had several church groups from different denominations come together to collect items and pack boxes.”

The shoebox itself acts as a gift as well. Since they are plastic tubs, children have been seen using them to collect water for their home, Seal said.

“We believe that a soccer ball touches more than just the boy that receives the box, it touches a community,” Seal said.

Each shoebox costs $9 to ship to a child.

Anyone interested in donating or helping Operation Christmas Child, can visit Dash Forward Boutique at 230 W. Union Rd. in Carriere or call 601-347-8285.

“This is such a great time of fellowship and ministry,” Seal said. “It has (gone) from my mom doing this out of our home with just a few friends and family to a community-wide project,” Seal said. “It has been amazing the amount of people wanting to help by either donating their time packing, money through dash forward for shipping, or items to include in the shoeboxes.”