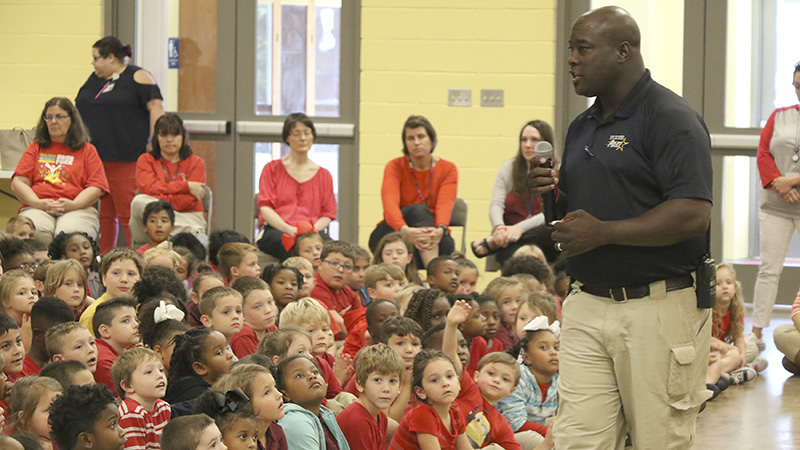 Students at Nicholson Elementary were treated to a rally Tuesday afternoon as part of the school district’s participation in Red Ribbon Week.

During the rally, the children heard from Lt. Lamar Thompson of the Picayune Police Department, who spoke about the importance of making good decisions in life, saying no to drugs and becoming part of the effort to stop bullying.

Tuesday, children were allowed to wear red shirts to school.

During Thompson’s presentation to the children, he brought out his K-9 companion, Ace.

After enlisting the help of Carter Thompson, Lamar’s son, to hide a mock “drug” in the room, Ace searched the area for the ball.

His prize for finding the “contraband” was his favorite orange tennis ball.

Red Ribbon Week began back in 1985 after DEA Agent Enrique Camarena died after he was kidnapped by five men and  was tortured, according to redribbon.org. The national effort grew based on Camarena’s belief that even though he was just one man, he could make difference.

Dorn said the effort has grown to include character development and anti-bullying efforts.

Red Ribbon Week continues through the rest of this week with various events at the local schools.

Each day this week, officers stop at a different Picayune school to greet the children as they arrive in the morning.