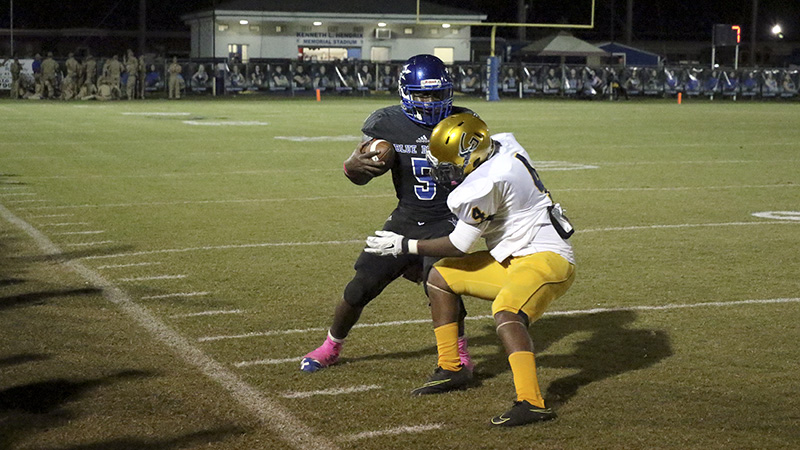 In what appeared to be another win for the Pearl River Central Blue Devils Friday night, ended with a last second loss to the Gautier Gators.

Going into the fourth quarter, the Gators had the lead with a score of 21-14. But several plays later, the Devils capitalized on nine plays for a total of more than 60 yards to bring the ball within three yards of the end zone.

Running back Louis Reese carried the ball the final three yards to give the Devils a chance to tie or go for two points. Head Coach Larry Dolan opted for the two-point conversion, which was brought even closer when the Devils prompted the Gators to prematurely cross the line of scrimmage, forcing a penalty and moving the ball to within a yard an half from the end zone. Reese would end up crossing that line, giving the Devils a one point lead of 22-21 with 2:07 left to play in the game.

The Gators took possession at the 36 yard line, and quarterback Kameron Kincaid led the team through seven plays varying from rushes to passes to bring the ball to the Devils’ 14. A rush by Kincaid from the 14 ended in a touchdown with just seven seconds left on the clock.

Gator kicker Kyle Cager would complete all four of his point after touchdown attempts, putting the final score at 28-22.

Other scoring plays by the Gators included a one yard run by Kincaid in the second quarter with 2:48 on the clock, a touchdown pass by Kincaid to wide receiver Daylan Ray from the 32 yard-line with 2:48 left in the third quarter and a 13 yard run in the fourth quarter with 7:13 left to play.

Additionaly scoring plays by the Devils included a four-yard run by Tristan Anderson in the first quarter with 3:45 and a three yard run in the third quarter by Reese with 4:30 on the clock. Reese followed that play up with a successful two-point conversion.

Devils kicker Oliver Cardenas’ attempt at a point after touchdown in the first quarter was unsuccessful.

“I thought we played well at times. We had a couple of big drives offensively; defensively we just didn’t get the stops we needed,” Dolan said. “The kids effort was there, but getting beat with seven seconds on the clock is a heart breaker.”