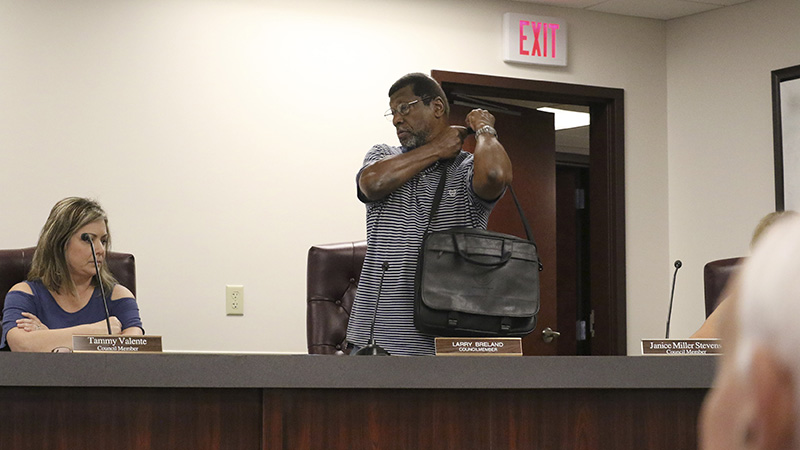 DEFIANCE: Councilor Larry Breland packs up his belongings after expressing his discontent with his fellow councilors. Photo by Jeremy Pittari

A two-mill increase was approved by the Picayune City Council Friday morning is expected to bring raises to all city employees.
However, the meeting began with division amongst members of the Council. Two matters were on the agenda that morning, one was to approve the fiscal year 2018 budget with added capital projects, specifically for the cemetery on Eighth Street and city parks not including Friendship Park, while the second left off those projects.
Councilor Larry Breland made a motion to approve the first budget with the capital projects, but no other councilors seconded that motion. Councilor Lynn Bogan Bumpers was late to the meeting, arriving seconds after Breland’s motion died for a lack of a second.
As Bumpers walked into the Council chambers, Breland said he couldn’t understand why none of the other councilors would support improvements at those two locations, especially when, according to him, the funds are there.
However, Mayor Ed Pinero said that while Breland is correct that the funds are there, what Breland was referring to was the money in the city’s reserve fund, which is set aside for emergencies, such as in the aftermath of a major disaster.
Breland then asked if he could make the motion again now that Bumpers was present. City Clerk Amber Hinton said another motion could not be made since the first motion died for a lack of a second and it was a recessed meeting.
At that point Breland and Bumpers expressed their discontent. Bumpers said she is glad no one ran against her during the last election, because she felt she hasn’t been able to accomplish anything.
“Every time we put something on the agenda, it’s never done,” Bumpers said about she and Breland.
With that, both Breland and Bumpers picked up their belongings, and left the meeting prematurely.
The remaining members of the Council then approved a motion to move forward with the budget without the proposed capital projects, which would include a two-mill increase in ad valorem taxes that would be used to give all city employees a raise.
Hinton said the raises would be handled differently, depending on the department in question. Within the fire and police departments, the starting wages would be automatically increased. Starting pay for a police officer would rise from $12.10 an hour to $14.22, while starting pay for a firefighter would increase from $9.06 to $9.63 an hour.
All personnel currently employed within those departments would see step increases.
Within the remaining departments, each department head will be given three percent more revenue to provide to employees in the form of raises based on merit determined by that management, Hinton said.
“This is a historic day because we have finally been able to increase the police and fire to make their salaries competitive,” Pinero said. “We’re excited to be able to do something for our employees.”
According to previous coverage based on information from the City Clerk’s office, the increase will mean taxpayers with residential property assessed at $100,000 will pay an additional $20 per year in city property taxes, bringing that bill to $386.10.
Owners of businesses assessed at $100,000 will pay $579.15 per year, a $30 per year increase. Those figures do not include school district and county taxes, previous coverage states.
For the next fiscal year, the city has set a total budget of $28.2 million, of which about $3.3 million will come from ad valorem taxes.

Board of Supervisors approve same millage rate as last…