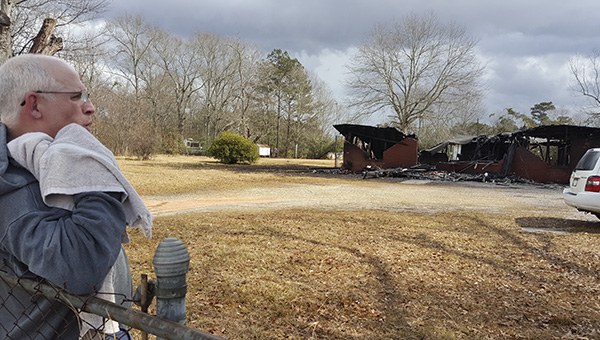 SAFE AND SOUND: Mark Best stands outside his home, which burned during a Monday morning fire.
Photo by Jeremy Pittari

Installing fresh batteries in their smoke detectors may have saved the life of one Carriere couple.
Mark Best and his wife were sound asleep Monday morning at about 4:30 when he said he was awakened by strange noises he initially thought were coming from the television, but were really coming from the smoke detectors. Still groggy, Best said he saw what he thought was the flicker of television commercials bouncing off the wall in the hallway, so he got up to check it out. What he found was not light and sound from the television.
“It wasn’t commercials, it was flames,” Best said.
Initially he and his wife wanted to flee the burning home through the front door, but the fire was blocking their escape.
Instead, his wife, their two dogs and Best all had to evacuate through the window.
By the time the family had made it to the front of the house, Best said the windows blew out. Twenty-five minutes later the house was gone.
“It’s a total loss. We lost everything, but we didn’t lose our lives,” Best said.
Pearl River County Fire Marshal Albert Lee said the couple told firefighters that they had just changed the batteries in their smoke detectors after reading an article in the Picayune Item.
“There’s another save off of that article right there,” Lee said.
While the initial cause is suspected to be accidental, Lee said the official cause of the fire is still under investigation, and expects the state fire marshal to be in the area later this week. Best said the house was old, built in the 1960s, so it still had the old screw-in fuses. Also, the house would make strange popping noises when a train would pass by on the nearby tracks, so he suspects the cause could be electrical.
For now, the couple will be staying with family who live in Pearl River County, Best said.
Volunteer firefighters worked a second structure fire over the weekend. Lee said it occurred Saturday night at about 9 at a home located at 53 Windy Hill Drive East. The flames damaged the home beyond repair, but fortunately no one was home at the time, Lee said.
Witnesses state the fire appeared to have originated above the garage. Just like Monday morning’s fire, Lee suspects the cause to be accidental, but when the state fire marshal comes in later this week a more extensive investigation will take place.