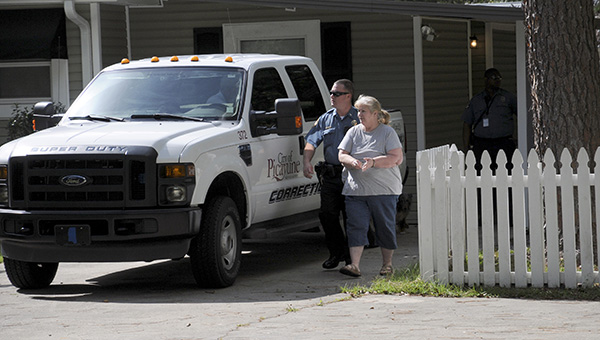 ARRESTED: Lynne Hackney was arrested Friday morning for two counts of simple animal neglect. Law enforcement agencies found her to be holding more than 50 dogs at her home, most were in sheds with no air conditioning or ventilation. The temperature in the sheds was reported to exceed 100 degrees.

A Pearl River County woman is facing charges of animal neglect after failing to provide more than 50 dogs with proper care.
This case began two weeks ago when a community member reported a number of dogs being kept at a home on Sycamore Road that appeared to not be occupied by people.
The Pearl River County Sheriff’s Department checked the condition of the dogs, and while they were to be living in less than ideal conditions, they appeared to be in mostly good health.
Power was still on at the home, and three window air conditioners were reported to be keeping the interior cool. After law enforcement responded, a person who claimed to be the property owner told law enforcement the house was being rented and moved the dogs to another location, according to the previous story.
Since that time the dogs were moved to another site.
Picayune Police Department Assistant Chief Jeremy Magri came into contact with the owner of the dogs after a violation of a city ordinance that states residents can have no more than six animals on their property at one time was discovered. He said he went to the home located at 2202 East Canal Street to find the occupant had more than 50 dogs living in and around the home. He advised her a week ago that she had to come within compliance of the ordinance, but by Friday she failed to do so, Magri said.
Lt. Joe Quave with the Pearl River County Sheriff’s Department said the owner of the dogs and occupant of the home on East Canal Street was identified as 57-year-old Lynne Hackney. She and her husband, 56-year-old Milles Allen, have since been arrested for two counts each of simple animal cruelty after the subsequent investigation found the dogs to be living in poor conditions, Quave said.
Even though the situation entailed more than 50 dogs, Quave said law enforcement is restricted by state law, which says offenders can only be charged with one count per instance, no matter how many animals are involved. Hackney and Milles’ charges stem from the instance on Sycamore Road, and the instance on Canal Street.
“Although there is room for improvement with Mississippi’s animal cruelty laws, we will enforce what we have to the fullest extent of the law,” Quave said.
Officers arrived Friday to find two sheds full of dogs, most of which were being kept in kennels, some three to a cage, Magri said. Magri described one kennel under the carport to contain three small breed dogs huddled together, one looked half dead. A veterinarian is coming into town to evaluate the dogs tomorrow, Magri said. All were standing or lying in their own excrement and had no food or water within reach. Magri said one of the dogs in that kennel had fur matted so bad it could not walk. Another kennel in a shed on the property contained three full-grown medium sized dogs.
All of the animals in the two sheds on the property were sitting in about two inches of their own excrement, and were limping due to the ammonia in their urine, which covered the ground, burning their paws, Magri said.
Magri said it took three trailer loads to move all of the dogs to the Pearl River County SPCA on Palestine Road.Quave said his investigation showed Hackney was running an online dog breeding business, called Bleu Moon Cattle Dogs.
The website states the dogs are “housed in a climate controlled ‘doggy room’. They are only put up at night, in bad weather or on very hot days.”
But Magri said his discovery found the dogs living in a shed with no ventilation, and no air conditioning with temperatures exceeding 100 degrees. “It was just unbelievable,” Magri said.
Both suspects may be facing additional charges due to city ordinance violations, Magri said.