Woman arrested again after bonding out for separate charge 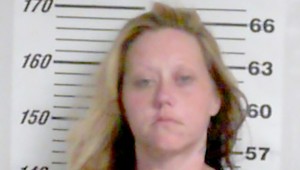 A woman arrested for public drunk and shoplifting was arrested again the next day about an hour after bonding out.

Her story began on Sept. 4 when officers were sent to a local business in reference to a woman shoplifting, said Picayune Police Assistant Chief Jeremy Magri.

When the officer arrived he spoke with the complainant who said the woman entered the store and later purchased a couple of items, but as she exited the business the anti theft alarm at the front doors sounded, Magri said.

As the employee approached the woman, later identified as 36-year-old Amanda Marshall of 7 Darby Lane, Carriere, she dropped the bags she was carrying and fled on foot down Beech Street, Magri said.

In the bags the employee found $26 worth of personal hygiene items Marshall allegedly tried to steal, Magri said.

Officers canvassed the area, later finding Marshall coming out of a wooded area near Bennett Street and Seventh Avenue. As the officer spoke with Marshall, he noticed she slurred her speech and had a bloodshot appearance to her eyes, Magri said. Marshall told the officer she took an unknown amount of oxycontin that day, Magri said.

She was taken into custody on the charges of shoplifting and public drunk and booked into the jail, Magri said.

At about 9:30 the next morning Marshall bonded out of jail, according to police department records. By 10:46 a.m. the same day the department was sent to another call that involved Marshall.

When officers arrived they spoke with the employee of a local convenience store, who said Marshall had been in the bathroom for the past 30 minutes.

After listening outside the door for a short time and hearing nothing the officer knocked several times. Magri said Marshall opened the door to the bathroom, at which time the officer noted her to be unsteady on her feet, speaking in a slurred manner, having bloodshot eyes and that her hair was disheveled, Magri said.

Due to her appearance and behavior, the officers suspected she was intoxicated on a narcotic.

In the bathroom the officer found an uncapped syringe containing an unknown liquid and a prescription pill bottle for oxycontin with Marshall’s name on it.

She was taken into custody for possession of paraphernalia and public drunk.