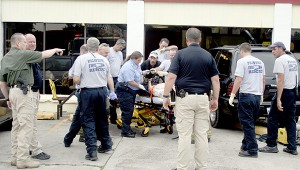 Emergency personnel tend to the injured in Thursday’ accident.
Photo by Jeremy Pittari

The accident occurred at about 2 p.m. that day. Emergency personnel were called to the local business to tend to at least two injured people.

Picayune Police Assistant Chief Jeremy Magri said the driver of the vehicle told officers that as she was pulling up to the business, she attempted to put the vehicle in park, but instead drove through the business.

Magri said two people were injured when they were pinned against the vehicle and the bar of the business after the vehicle crashed through a large window. EMS personnel were performing CPR on one of the injured during transport, while the second was conscious and speaking, Magri said.

Pearl River County Coroner Derek Turnage confirmed that one of the injured passed away, identified as 78-year-old Joel C. Bennett.

More information will be released in a follow up story.

Emergency personnel tend to the injured in Thursday’ accident.Photo by Jeremy Pittari A vehicle accidentally drove through the Donut Hole... read more