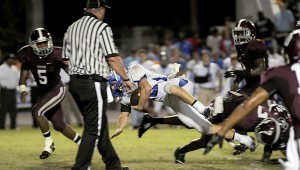 DIVING TO THE END ZONE: Pic vs PRC 1 – Pearl River Central running back Christian Roberts dives into the end zone during their matchup with the Picayune Maroon Tide. The Tide won the game 19-14.
Photo by Jeremy Pittari

In a game referred to by both head coaches as a tough game, the Maroon Tide came out on top with a score of 19-14 against the Blue Devils.

The long-standing rivalry game made for intense action in just about every quarter. But the end of the game is where it came down to the wire.

“It was a great win for us but a tough loss for them,” Picayune Head Coach Dodd Lee said.

Pearl River Central’s Blue Devils looked like they might take the lead in the closing minutes of the final quarter with the score so close, but a fumble on a play that would have been a first down by running back Hunter Holifield put the ball back in the Tide’s hands.

“It was a hard fought battle but we just didn’t get it done when we had our chances,” Pearl River Central head coach Eric Collins said. “We had momentum there at the end and put the ball on the ground. It’s just one of those things, we got to get back to work and see if we can execute a little bit better.”

Both teams started out with good offense and defense throughout the first quarter. Neither team put points on the board until the second quarter when Tide running back Gerrell Keaton ran the ball more than 55 yards to the Devils’ end zone. The successful extra point put the Tide on the board with 8:50 left in the second quarter.

Pearl River Central answered back in their subsequent possession when running back Christian Roberts ran the ball 23 yards for a Devils’ touchdown with 3:58 left to play in the half.

Picayune would score once more before halftime. With 57 second left to play, Tide running back Vyron Brown ran the ball 34 yards. But a missed extra point attempt put the score 13-7.

In the second half Picayune quarterback Skylar Bowman completed a pass to running back Kardarius Cross, which resulted in a 70 yard touchdown. The Tide’s attempt at a two point conversion was no good, leaving the score 19-7.

A fumble on the Devils next possession would put the ball back in Tide play, but when fourth down came around and the Tide attempted to punt the ball, it slipped out of Cross’ hands, forcing him to run the ball all the way to the end zone from their 47 yard line.

Celebration on the Tide side of the stadium would come to a close when a flag on the field for an illegal block by the Tide put the ball back 15-yards from where they started.

Another punt attempt on the same fourth down was also fumbled and recovered by the Tide resulting in the Devils taking possession at the Tide 13 yard line.

The Devils would use that opportunity to score three plays later when Roberts ran the ball seven yards for a touchdown with 7:25 left to play in the third.

The successful extra point would be the last time points were added to the board for the remainder of the game, leaving the Tide up 19-14 by the end of the game.

But the Devils did try to take the game in the fourth quarter, however that fumble near the 50 yard line resulted in the Tide holding possession of the ball until the clock ran out.

Both teams have open weeks next week.