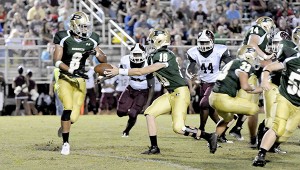 While Poplarville’ offense was strong, the defense gave up a lot of yards and quite a few touchdowns.

“We got to work out those busted coverages, which this game was good for us. It gave us a chance to fix those mistakes. But I think we executed well in offense and put the pressure on them,” said Poplarville Head Coach Jay Beech about Friday’s game.

While there were some defensive issues, the Hornets never lost the lead.

There were some bright spots from the defense, however. In the first quarter the Bearcats utilized nine plays to get down the field to the 27-yard line, but an interception by the Hornets’ Camden Ray forced a turnover.

It wasn’t until almost the end of the first quarter that the Hornets put points on the board. With about 2 minutes left in the quarter wide back Anthony Martin ran the ball 25 yards for a touchdown, putting the Hornets on the board and in the lead 7-0 after the successful extra point.

In the second quarter the Hornets made a big play when Martin ran the ball in from their 34-yard line for a 66-yard touchdown. A successful extra point attempt put the score 14-0.

The Bearcats would answer back in the same quarter with 9:26 remaining when quarterback Bruce Mathes completed a pass to wide receiver Payton Bourdin for a 35-yard touchdown. Their missed attempt at the extra point put the score at 14-6.

In that same quarter Hornets full back Blake Saucier ran the ball five yards for a touchdown with 6:25 left to play, the score was 21-6.

In that same quarter in a subsequent possession the Hornets attempted to score again with a 71 yard touchdown run by Martin, but a false start penalty on the Hornets brought the ball back to their 29-yard line.

The Bearcats would narrow the gap in the second quarter when Mathes ran the ball for a three-yard touchdown. The score was 21-13 with about 30 seconds left in the first half.

But the Hornets answered right back, utilizing two plays by running back Malik Lucas, who ran the ball from their own 44 yard line to just three yards from the end zone. Full Back Tyler Fricke would bring the ball the remaining three yards and earn the Hornets another touchdown, bringing the score to 28-13.

A fumble during the Hornets’ first possession in the second half put the ball in the Bearcats hands, who would utilize that opportunity to score when Mathes completed a pass to Bourdin for a 29-yard touchdown. The missed extra point put the score at 28-19.

The Hornets would then score again as Lucas ran the ball 12 yards to the end zone. The score was 35-19.

Mathes would complete another pass to Bourdin with 2:47 left to play in the third, and a successful two-point conversion play by the same pair brought the score to 35-27.

Poplarville answered right back when Lucas ran the ball in nine yards in the same quarter to bring the score to 42-27 with the successful extra point.

Each team would score one more time in the final quarter.

Hornets’ full back Jesse Pernell completed an 18-yard run to bring the score to 49-27. And the Bearcats’ Mathes-Bourdin successful pass would max their score at 49-33.

Bearcats head coach Forrest Williams said of the game, “We got to do a better job of tackling. A couple of turnovers hurt us there. We had the opportunity to swing back in the game but they did a good job running the ball and we got to get tougher to be able to stop them.”

For next week’s game Williams and his team will prepare during practice.

“We got to be a lot more physical team down the stretch in order to compete in 5-A,” Williams said.

Following last week’s loss to the Pearl River Central Blue Devils the Hornets put some extra effort in their preparation for Friday’s matchup.

“We took care of those fumbling issues we had last week and that’s one of the things we focused on this week so I’m happy about that.

He also had some credit to give.

“I just want to give big credit to our assistant coaches. This week they really did a good job getting our kids focused for this game.”