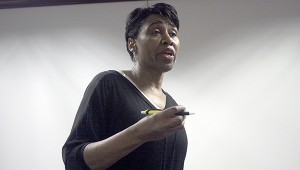 SERVING MORE CHILDREN: Dr. Pamela Thomas spoke to the Picayune School Board about potential areas of expansion for the Early Head Start program. Thomas is the director of the program in Picayune.
Photo by Jeremy Pittari

Picayune’s Separate Municipal School District board of trustees approved a motion to apply for grant funding that would allow the district to provide educational services to more four-year-olds.
An upcoming addition will add 60 four-year-olds in three additional classes to the Early Head Start program, bringing the total to 100 students, Assistant Superintendent Brent Harrell said. Currently 40 four-year-olds participate in the program at South Side Elementary.
Harrell informed the board that the Mississippi Department of Education is applying for $15 million in federal funding to add slots statewide.
The school district would be responsible for a match of $180,000 for their part of the grant. The funds would provide salaries, benefits and class supplies for the additional teachers. If approved the additional children would be spread out between the various elementary schools in the district.
After board member Jimmy Hancock expressed some reservations about the proposed change based on the possibility of the district being forced to take over funding of the program after the initial four years, the board approved a motion to apply for the grant.
In other Head Start news, Early Head Start director Dr. Pam Thomas informed the board that the Mississippi Action for Progress program is up for bid, and if the district decides to bid and it is approved the shift would open the early education program up to children of all backgrounds, regardless of family income.
MAP is the largest provider of Head Start programs in the state.
The goal is to provide the same early education to all children, Thomas said.
Harrell said there are 327 four-year-olds in the district, and if the grant is approved the program would provide 200 more slots, in addition to the previously mentioned 100, almost covering every child in that age range.
The board also discussed applying for a grant to purchase new combi-ovens for Roseland Park and Nicholson elementary schools, which could call for a match of up to $18,000, Harrell said.
Combi-ovens are already being used at the junior high and West Side Elementary schools, and Harrell said at some point the district would be required to make the transition at all schools.
Board members approved applying for the grant.
A new school safety monitor is being added to the high school’s payroll. Superintendent Dean Shaw said this position would be in addition to the school resource officers working at Nicholson Elementary, Picayune Memorial High School and the Center for Alternative Education. Harrell said the position is only for the high school and would entail a person being on-site during weekends and after school hours. The district felt a need to protect the facility from vandalism due to a break in at high school over the summer, Harrell said.