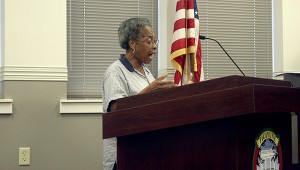 VOICING CONCERNS: Picayune resident Naomi Smith shared her observations of suspected gambling going on at the park across the street from her home.
Photo by Jeremy Pittari

City Clerk Amber Hinton said the increase in school district taxes is due to a drop in assessments, and since the school district requested the same amount of funding as last year, a tax increase was required to reach that amount.

Before the budget was approved, council member Larry Breland expressed his discontent with not increasing taxes, saying the increase in services but no increase in staff is “an injustice to the employees of the city of Picayune.”

The budget approved at Tuesday’s meeting does not entail increases in city utility services. That matter will be handled during a subsequent meeting, Hinton said.

When Breland asked if the financial department was considering a rate increase on water, Hinton said “yes.”

In other matters the council discussed construction of 12 more parking spaces on the north side of Main Street similar to those across from PJ’s Coffee house on Main Street.

Grants Administrator Christy Goss said the work will be funded by a Mississippi Development Authority Infrastructure Program Grant of $30,000, with a $6,000 match by the city. City Manager Jim Luke said he is in discussions with businesses in that area about adding additional parking spaces should they decide to donate some funds.

The council decided to table rescinding the billboard moratorium along Interstate 59 until they can secure additional details from the Mississippi Department of Transportation about their permitting process and proper spacing.

Work is expected to take place along Sycamore Road to install some new lighting, and also conduct asphalt improvements to the small section of Memorial Boulevard that is in need of repair. City Engineer Vernon Moore said the project entails $248,000 in state aid funds to conduct the work. The project will only install as many lights as the remaining funds will allow from the intersection of Highland Commons and Sycamore Road towards the intersection of Sycamore Road and U.S. 11. Moore said he would like to be able to bid the project out in the next month or so.

Some clarification about who will be responsible for the upkeep of the Superfund site was shared at the meeting. Planning and Zoning Director Diane Miller said she and several other city representatives held a conference call with a representative of the Environmental Protection Agency. City Attorney Nathan Farmer informed the council that during that discussion it was determined that once the EPA has concluded their work, the property and the responsibility to maintain it will fall to the state of Mississippi.

During the citizen concerns section of the meeting Rosa Street resident Naomi Smith addressed the council alleging that young people hang out at JP Johnson Park during all hours of the night gambling and playing basketball.

“Somethin (sic) need to be done. It don’t make no sense to be out there gamblin (sic),” Smith said.

Police Chief Bryan Dawsey said he has initiated extra patrol in that area, but the problem lies in the fact that curfew does not apply to adults and once officers request the people leave the park, they return shortly after the officer leaves.

In other council business members;

— Approved a special use permit to Tokyo Sushi & Grill, to be located at 704 Memorial Boulevard, for the sale of alcoholic beverages less than 8 percent alcoholic content, including beer and light wine.