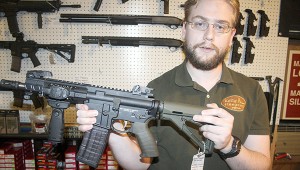 HOMEMADE: Tavish Kelly of Kelly Firearms near Picayune shows off one of the guns they make at the business, an AR-15 rifle.
Photo by Jeremy Pittari

Hunting and gun enthusiasts should take advantage of this weekend’s sales tax holiday.

Friday through Sunday the State of Mississippi will hold its first Second Amendment Sales Tax Holiday.

But instead of traveling across state lines, Mississippi residents can spend their money close to home.

Outside of pawnshops, there is only one firearm store in the Picayune area, Kelly Firearms. It is located just outside the city limits off of Interstate 59’s exit 1, at 72 Hwy. 607, which is just outside of the Stennis Space Center buffer zone inside a private home. Manager Thom Kelly said the business offers many kinds of firearms and ammunition and will be open extended hours from 9 a.m. to 6 p.m. Friday, Saturday and Sunday.

Some of the items that will be tax exempt this weekend include pistols, revolvers, rifles, shotguns, bullets, shotgun shells, bows and bow accessories, cases designed for guns and holsters.

The Second Amendment Sales Tax Holiday was established as part of Senate Bill 2425m, which was passed this year and authored by Sen. Philip Moran of Kiln, according to a release from Lt. Gov. Tate Reeves’ office.

“With dove season underway and deer season less than a month away, this weekend is a great time to take advantage of this tax break,” Reeves said in the release. “Mississippians love to hunt and this sales tax holiday makes it a little less expensive to enjoy the outdoors.”

The release also urges voters to support an amendment that will be on the Nov. 4 ballot establishing hunting and fishing as a constitutional right in the state of Mississippi.

In preparation for the event Kelly Firearms has computers ready to conduct background checks.

Thom Kelly said business has been slow in the past week because people are waiting until this weekend’s tax holiday to make a purchase.

Tavish Kelly said, outside of pawn shops, the only other gun stores close by are in Slidell, La., Gulfport and Pass Christian.

Kelly Firearms also manufactures their own AR-15 rifles and also makes silencers for various guns. The business is a class 3 licensed retailer. That classification allows them to sell short barrel and silenced weapons. Tavish Kelly said in order to purchase a short barrel or silenced weapon the wait time is a bit longer, up to nine months, because the government conducts background checks manually rather than with computer assistance. Customers should also keep in mind that there is a $200 federal tax in order to purchase such a weapon.

During the tax holiday, customers looking for a specific item that may not be in stock at Kelly Firearms can still save by ordering and purchasing that item this weekend, Tavish Kelly said.

For a complete list of items that will and will not be exempt visit http://www.dor.ms.gov/docs/2014SecondAmendmenttotheSalesTaxHoliday_3.pdf.