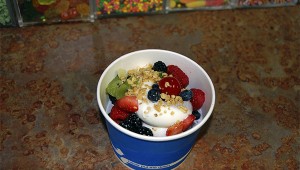 It’s that yummy treat that most people dream about after the completion of their dinner.

There are many delicious dessert options including, cakes, ice cream and cookies.

As of last Friday, residents of Poplarville have a new and healthy place to take the family after a great meal; it’s called the Yogurt Bucket.

Chuck Heck has been living in Poplarville since he was a teenager.

Prior to opening the business, Heck owned a shrimp boat, but due to a slow shrimp season and the rising cost of fuel, he decided to sell the boat.

According to internationalfrozenyogurt.com, frozen yogurt is a dessert made from or containing yogurt, milk, yogurt cultures and sweetener. Frozen yogurt was invented in the early 1970s as a soft serve dessert marketed as Frogurt by H.P. Hood, a dairy farmer from New England. It was described as a healthier, low-fat alternative to ice cream.

Heck said his is the first yogurt bar to open in the Poplarville area.

“This is a happy, family-oriented place,” Heck said. “The taste of frozen yogurt has surpassed that of ice cream. It’s much healthier than ice cream.”

Heck offers two sorbet flavors for people that cannot have milk products and yogurt with no sugar added for people with illnesses such as diabetes.

“The center handle mixes the two flavors on each side,” Heck said. “For example, if you mix the blueberry and Tahitian vanilla, you get blueberry a la mode.”

Heck said there will be a new flavor each week, a flavor of the month and holiday flavors.

At the Yogurt Bucket, customers can create their own special treat by utilizing the more than 36 toppings Heck has available including sprinkles, gummy bears, chocolate chips, fresh fruit, granola and coconut. Customers can top their creation with caramel, hot chocolate, white chocolate, marshmallow cream or peanut butter sauce.

Heck said customers pay by the ounce after the final topping has been added.

The Yogurt Bucket is open Monday through Saturday from 11 a.m. to 9 p.m.

There is free Wi-Fi access in the building, Heck said, and there will be a big screen television mounted soon.

Every Friday, Heck said, customers can guess the weight of their yogurt and if they are right, the yogurt is free.

“I believe this new business is going to bring local jobs to young adults and help strengthen Poplarville,” Heck said. “It will raise the bar and is a positive step for the city to move progressively forward.”

The Yogurt Bucket is located at 1403 South Main Street.