Friends of Boley will clean creek in October, looking for volunteers 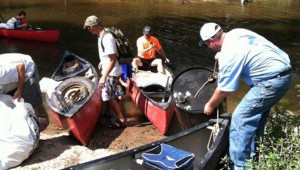 CLEAN CREEK: In this file photo from last year’s Boley Creek cleanup, volunteers remove all kinds of debris from the Hobolochitto Creek such as tires and 50-gallon drums. Another cleanup event has been set for October.
File photo

Friends of Boley is planning a cleanup event for early October.

Friends of Boley is a group of community members who initiate cleanup events once or twice a year to remove the trash from Pearl River County’s local creeks. So far their efforts have focused on a section of the West Hobolochitto creek between Long and Burnt bridges because it consistently clogs and collects trash.

“I know we keep focusing on that area but we keep getting jams in there,” said Keith Kingrey.

This year’s event is set for Oct. 4, and will begin putting people in the water at about 8 a.m. Participants should show up early to complete registration. Volunteers will begin the cleanup at  Long Bridge on Beech Street and exit the creek at Burnt Bridge.

Kingrey said a tree-cutting group is expected to be able to float down that section of the creek a week or two beforehand to ensure canoes and kayaks can make it easily down the creek. The crews will only cut a path large enough for small watercraft to navigate through.

Friends of Boley was founded several years ago when group member John Huck and his family were traversing the creek and came across a large jam that had collected lots of trash, including refrigerators, coolers and plastic bottles.

Huck discussed the discovery with other like-minded community members and Friends of Boley was founded a short time later.

Since that time cleanups have been held almost annually.

For this year’s event Kingrey said he has ordered shirts from Mississippi Power, and Coast Electric Power Association will provide the lunch. The Civic Women’s Club will provide coffee, donuts and orange juice for breakfast, Kingrey said.

He has also secured about 30 canoes for those who don’t have one of their own.

“I think this time we’ll get all 30 canoes in the water,” Kingrey said.

Just like in previous years there will be prizes for the most unusual piece of trash, the largest piece of trash and the most trash collected. Prizes will include gift cards to a local retailer.

Anyone who wishes to volunteer for the cleanup can bring their own canoe or kayak if they own one, but there will be canoes to borrow.

Participants can expect a three to four hour trip down the creek.

Pearl River County Emergency Operations Director Danny Manley will check with local first responders to see if they can volunteer during the event.