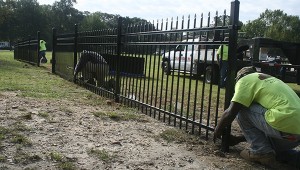 WROUGHT OF IRON: Contract workers began installing sections of the fence that will surround Crosby Commons on Goodyear Boulevard.
Photo by Jeremy Pittari

The first phase of the work at the city of Picayune’s new green space is officially underway with the installation of the wrought iron fence.

Wednesday morning contract workers were on site installing the sections of the decorative fence around the green space, now named Crosby Commons.

The fence will feature a number of entryways that will not only provide a way to control ingress and egress, but allow large vehicles to drive into the park to prepare for events. City engineer Brooks Wallace said there will be two eight-foot gates and two 16-foot gates at opposite sides of the park. Four 4-foot gates will also be around the park to allow pedestrians to enter.

The first phase of the park is being funded through a $100,000 grant from the Lower Pearl River Valley Foundation.

Wallace said the first phase will include construction of a ramped concrete entryway facing Goodyear Boulevard to make the park handicapped accessible. The paved entrance will stretch into the park and include landscaping.

A second phase will be funded by a $500,000 Mississippi Department of Transportation grant and will include construction a walking and running track, along with a covered ampitheatre. Next to the ampitheatre will be restrooms and a changing area, Wallace said. The ampitheatre will be placed near the intersection of Kirkwood and Sixth Avenue within the park. Phase one and two are expected to be complete within a year and a half to two years, Wallace said.

City Manager Jim Luke said he envisions installing a number of markers around the park to denote historic events, including the plaque formerly displayed in the hospital that used to occupy the site. Luke said that site was the location of the first high school football game, former location of a post office and a staging area for wagons during floods. Historic markers will not be limited to events that took place at that site, but will include all significant events.

An event is already planned for the park on Nov. 15. Greater Picayune Area Chamber of Commerce Director April Lovelace said the event is called Run With the Pigs, and will be the first event at the park to offer beer sales. It will feature races and a barbecue cookoff.

Lovelace said the event will have Lazy Magnolia and Rex Distributing on hand to sell alcoholic beverages.

Lovelace said the event will be hosted in conjunction with the Chamber, Mississippi Mud Pirates and Pearl River County Home Builders Association. Funds raised at the event will go towards local scholarships and special community projects, Lovelace said.