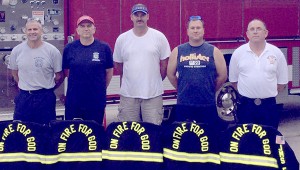 UP FOR THE CHALLENGE: From left in the photo above is Donny Leonard Sr., Steve Seal, Ronnie Reynolds, Tony Scharenbrock and Chris Banks, who are part of the competitive firefighter team “On Fire for God.” They headed to Texas this weekend to compete in the Scott Firefighter Combat Challenge.
Submitted Photo

A team of local firefighters is heading to Texas this weekend to participate in the Scott Firefighter Combat Challenge.

The relay race involves a number of tasks that firefighters conduct when responding to fires, including chopping, carrying a rolled fire hose, pulling a charged fire hose to a destination before shooting water at a target and dragging an adult sized dummy a certain distance.

Leonard said he plans to compete in the solo race, which will be held Saturday. In the solo race one person completes all the tasks of the relay race as fast as they can.

Leonard and his son will also compete in the father son tandem run.

On Sunday, the team will compete in the relay race, where one person of the team completes one part of the course at a time. They have named their team “On Fire for God” and will also hold devotionals before each day’s competitions. Leonard said as part of that effort they will be handing out Bibles to those who want them.

Last year the team participated in the competition, coming in third place nationally in the 40 and older relay category.

“We will try to do better this time,” Leonard said.

In October the team plans to compete in two more of the competitions, to be held in Texas and Alabama.

The team is looking for donations to help with travel and food costs associated with the competition.