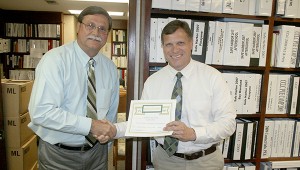 Poplarville’s School Board of Trustees discussed replacing a field house at the baseball field and recognized the high school for receiving a nationwide designation for the second time.

A field house at the baseball field needs to be replaced due to roofing and flooding issues.

Superintendent Carl Merritt said the old field house had to be torn down due to a leaking roof, it’s placement on the field and a build up of mold.

When Merritt mentioned the old slab could be used for something else, such as a bathroom, board member Sambo Gentry expressed concern due to the previous issues.

The problem deals with the location, which is at the bottom of a hill. Heavy rains cause it to flood, Gentry said.

Merritt said instead of bathrooms the 40 by 40 slab could be used for bleachers.

Since baseball season doesn’t start until after Christmas break, the matter could be tabled until more information could be gathered, Merritt said. That information would be required to secure a proper bid to conduct the work.

The board approved a motion to table the matter until more information could be gathered.

In other business Merritt presented Poplarville High School Principal Jon Will with a certificate of recognition because the high school was given a bronze designation by the U.S. News World Reports. Merritt said this was the second time the school has received that designation, which is not solicited but based on student test scores.

The board also approved a motion concerning the MDE School Nurse Intervention Program grant. The $100,000 grant provides for two nurses at the school district. Merrit said without that grant the district would be without nurses.