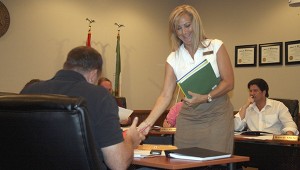 FOR CONSIDERATION: Kim Hart with Smoke Free Mississippi presented the Poplarville Board of Aldermen with information about becoming the 89th state to become smoke free. The board also declared Sept. 17 to 21 as Constitution Week.
Photo by Jeremy Pittari

Poplarville’s Board of Aldermen approved an amended budget that included increases in many departments.

City Clerk Jody Stuart presented the increases to the board during Tuesday’s meeting.

The increases entailed an additional $150,000 to the general fund, a possible $301,000 concerning the purchase of the fire department’s new fire truck, $13,000 more to forfeitures and an additional $6,000 to the unemployment fund to zero it out, Stuart said.

Stuart also asked for an additional $30,000 for the water department to cover any unexpected repairs that may come up during the fiscal year.

The board approved the budget amendments.

Wireless Internet service in the downtown area may become a reality, but the board wants to secure more information first.

By adding this service, the city would have a reason to draw pedestrians to the downtown area, and subsequently into those businesses. The service is not intended to replace wireless Internet services those businesses already provide since the signal usually does not penetrate buildings.

During the presentation Anderson gave the board a number of ideas to fund the project, which included advertising opportunities, a city splash page, corporate donations or by turning the operation of the service over to the Poplarville Chamber of Commerce.

Anderson estimated a six megabyte connection would be sufficient for light use, so if the city had a enough bandwidth they could avoid a separate bill for Internet service. But if the service became popular, more bandwidth would be required.

The board decided to take his information under advisement and revisit the matter at a future meeting.

The board also considered becoming part of the Smoke Free Mississippi movement. Kim Hart, a representative of Smoke Free Mississippi, presented the board with informational packages, and said the city could apply for a $5,000 grant that would assist them in making the changes. Hart said there are 88 cities in the state that have become smoke free, Picayune included.

The change would apply to businesses, employers and public places, including parks. Board member Byron Wells said the city already has a smoke free policy for city buildings, and there are not many businesses, if any, that allow smoking.

The board took her information under advisement and will revisit it during the first meeting of October.

During the departmental reports Fire Chief Bobby Strahan informed the board that during the month of August the department responded to 19 emergency calls, one vehicle accident and five fire calls. The department also successfully performed a controlled burn on a dilapidated home at 109 Orr Street.

“We got a good burn out of it,” Strahan said.

Police Chief Charlie Fazende said during his departmental report that officers responded to a total of 266 calls, one for an assault, 12 were drug violations, one was a suicide, six were for suspicious persons and one was for a suspicious vehicle. Eight of the calls were for vehicle accidents and 197 citations were written that month.

The next aldermen meeting will be Oct. 7 at 5 p.m. in City Hall.