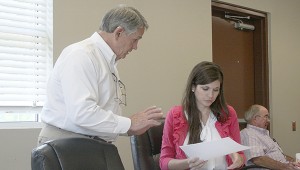 Pearl River County’s Utility Authority will receive a discount on their employee’s heath insurance rates, and is expected to see an increase in their revenue.

The Utility Authority’s health insurance representative, Michelle Fuller, informed the board that there will be some minor rate changes. While the group life, dental and vision rates will remain the same, the health insurance premiums will decrease by 7.9 percent. Fuller said the change is due in part to the changes in the ages of their employees. As younger employees replaced older ones, the organization was eligible for a rate reduction.

However administrative wages are down due to the vacancy of the executive director and expenses are coming in about $40,000 less than budgeted, bring the net loss to $160,000, Scott said.

Next year’s budget is being built around the Utility Authority’s last nine months of financial activity, Scott said. He expects their total revenue to be $3.6 million, costs of sales to come in at $1.9 million and their overhead to be about $2.3 million.

The Utility Authority owns and operates the Picayune and Poplarville wastewater treatment plants, which use ultraviolet light to treat the water; annual electricity expenses at those plants are $113,000 and $28,000 respectively, according to the proposed budget.

Board member Ike Lewis suggested the board look into ways to cut their electricity expenses.

The bulbs are also an expense. They have to be replaced after 10,000 hours, or after about a year and a half of use. There are 80 bulbs at the Picayune plant and 30 bulbs at the Poplarville plant. It is estimated the cost to replace those bulbs is expected to be $26,000 in Picayune and $10,000 in Poplarville.

Laboratory testing is being brought in house, so Scott sees the board saving about $38,000 a year with that change.

Scott also set aside $225,000 for a possible litigation matter, which was not explained. If that lawsuit is not filed then that money could be used elsewhere. Litigation matters are always discussed in executive session.

Revenue is expected to increase by 2.5 percent, or $88,000. Scott said that increase will be due to the processing of leachate from two landfills, the one in Millard and one located in Pecan Grove. It is expected that 80 loads of leachate will be processed at the Picayune treatment facility monthly.

The addition of more employees is expected to increase wage expenses by $78,000.

Installation of control units on the lift stations will be an extra expense, and a cost savings. Scott said that installation will entail a monitoring fee, expected to cost $22,000 annually. However, he expects it to bring about a savings in the long run by preventing employee call outs.

“We think overall it will save us a lot of money,” Caples said.

Scott said the board took no action on the budget presented because they intend to make some changes before approving it.

The next board meeting will be at 2 p.m. Sept. 18 at the Picayune treatment facility on Neal Road.