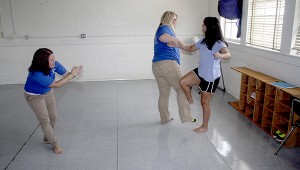 POINTS OF CONTACT: Students in the Pearl River Central High’s drama class learn a variety of acting techniques. Here their teacher, Ginger Schmidt, at left, coaches a couple of students on performing points of contact.
Photo by Jeremy Pittari

Drama students at Pearl River Central High School are receiving some training from The Juilliard School.

Drama teacher Ginger Schmidt attended a week-long workshop at the prestigious school last month, where she participated in hands-on training that focused on directing Shakespearian plays.

Their instruction used the famous playwright’s work entitled “Twelfth Night”, with each of the 25 handpicked teachers from around the country being assigned a scene to direct. Schmidt said she was the only teacher selected from Mississippi to participate in the workshop.

Part of the workshop included splitting the teachers into groups of five, and learning from each of the five mentors. Schmidt said it gave every teacher a chance to learn from all five mentors.

Not only did the training allow her to interact with fellow theater enthusiasts, but she also picked up some tips on how to teach her students the intricacies of theater.

“I don’t think there was a single second during that week that I wasn’t learning,” Schmidt said.

Some of what she learned is already being incorporated in her instruction.

Most high school students are not versed in relationships, so directing them to portray the gamut of emotions can be difficult. Schmidt said she learned a way for students to emulate those emotions without knowing they are doing it. She accomplishes this with an improvisation game called “status”.

By having each student pick a card and hold it to their forehead without looking at it they interact with each other. Each student is then directed to converse with the other based on the number the other person is holding up. That number represents their “status.”

After the interaction the students are asked to line up according to how they perceived their status based on how the other person interacted with them. Schmidt said the students usually get their status right, typically only missing by a number or two.

“As they are walking around the room they are improvising relationships,” Schmidt said.

Directing has no set recipe to create a successful production.

“Theater is art, there is no right way or wrong way,” Schmidt said.

So, as Schmidt enters her second year as the school’s drama teacher, she will use a new teaching method to reach the goal of a successful play. Schmidt said last year she was so focused on getting to the end result she neglected to pay attention to the journey.

This year she plans to use a creative atmosphere combined with positive reinforcement to not only enjoy the journey, but to collaboratively create a production with the students.

During the workshop she learned that in order to give one negative critique she must first give eight positive.

“I was forgetting to award and praise them for what they were doing right,” Schmidt said.

The workshop also reminded her of a lot of things she learned as she worked towards her degree in Fine Arts in Musical Theater, including the terminology.

“I’m literally giving them everything I learned when I was getting my Master’s degree,” Schmidt said.

This year they are working on their production of Lady White Snake, a play that tells the tale of a snake that can transform into a woman.

And Schmidt is also going to teach them about Chinese Opera, Kabuki, a Japanese dance drama, and Noh, which is a form of Japanese musical drama.